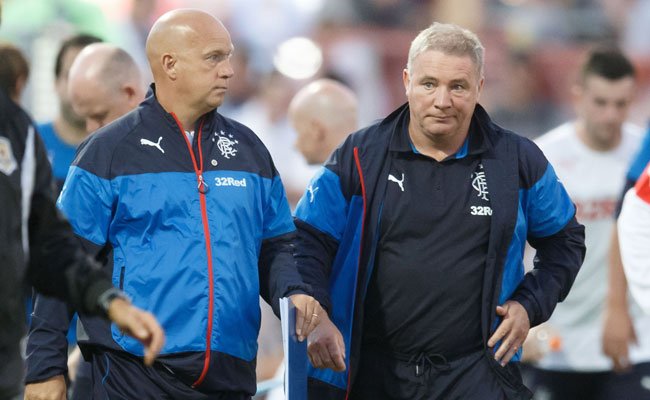 Rangers manager Ally McCoist took a few moment to talk with Rangers Report after the 2-1 victory over Sacramento Republic.  We discussed the match, the hotly debated tactical switches & whether some of the younger players will see more action in the final two matches of the US/Canada tour.

What did you say at half time to get the team to play with more tempo?

It was night & day wasn’t it?  You’ve hit the nail on the head – I just asked them to increase the tempo.

The tempo in the first half was poor.   We were rolling the ball out to the center backs – it was going wide but there was no penetration, no aggression.  I don’t mean kicking people I just mean an aggression – a tempo to the play .

The second half was miles better.   Darren McGregor came on & he really  influenced it – because he was going in to win the ball,  he was aggressive.   Marius Zaliukas then became a different player – he was aggressive & then everybody fed off of it.

We just played better all around in the second half & that’s what we’re looking for because the first half was disappointing.

Was the last game just an experiment?

No, we’ll try it again.  This is what preseason is all about – we’ve been working on it in training.

To be honest with you in the last game we defended as poorly as we have in a long time but I actually felt we defended worse in the second half with the four in the back rather then the first half with the three & five defenders.

So we’ll keep working on these things – that’s what preseason is all about.  But we certainly looked better today but we still didn’t defend well in the first half with the four but it was miles better in the second half.

We’ll keep working on it  in the preseason & we’ll try the three, the four, the five in the back.  It’s nice to have a couple of strings in your bow or you become too one dimensional.

Are we going to see more of the youngsters in the upcoming matches?

I hope so, yeah. We’ve got a game Monday night & a lot of traveling tomorrow so we’ll definitely look to freshen it up.

It was hot today & we’re not used to playing in that temperature – so we’ve got a lot of players with us & I’d like to think that we’ll freshen it up in the next couple of games.

7 thoughts on “A quick chat with Rangers manager Ally McCoist”