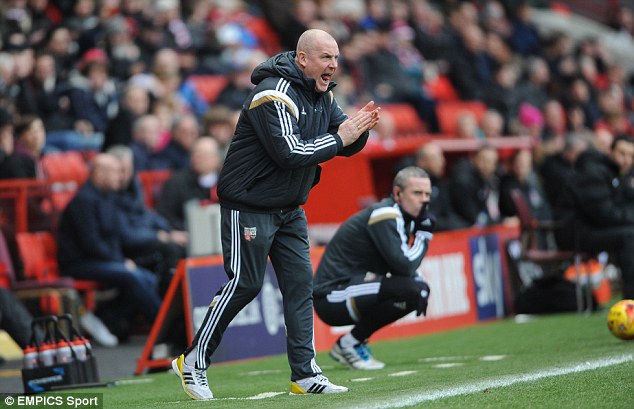 Mark Warburton has been moved into heavily odds-on favourite for the vacant managerial position in recent days, fuelling speculation that the former Brentford manager is primed to become the fourteenth permanent manager to walk up the marble staircase.

I earmarked him and Ian Cathro, the Valencia assistant coach, as my preferred candidates in a separate blog in early March but in recent weeks after studying Warburton’s credentials and analysing what is needed at the present moment I have to say that it is the duo of Marc Warburton and Davie Weir who seem to fit the bill in every sense.

After Ally McCoist’s tenure ended in sour taste, there has been a broad agreement between supporters that we need to move away from the ‘jobs for the boys’ mentality which has culminated in the mess we find ourselves in currently.

However, that doesn’t mean we should discount everyone with Rangers connections. Davie Weir may have struggled in his first managerial job at Sheffield United but after teaming up with Warburton at Brentford they had a magnificent eighteen months in charge, securing promotion from League One before guiding them to the Championship play-offs, eventually falling to Middlesbrough.

Due to the instability at the club, Weir would bring knowledge of the standards at Ibrox and would be a comforting presence for the new man in charge as he will have a very busy couple of months recruiting what will be practically a new team.

Many fans have claimed that Warburton is too inexperienced and that he hasn’t proven himself to be worthy of managing a club the size of Rangers. They have a valid point, but being in the second division of Scottish football with the toxic brand we have developed over recent years isn’t exactly an attractive proposition, so to be linked with the likes of Warburton, Cathro and Vitor Periera, the Olympiakos manager, is refreshing as it shows the enduring clout the Rangers name still has.

Warburton isn’t your typical football manager though, I give you that. After spending two decades as a City trader where he was turning over between £1.5-2m every day, he decided to take the plunge and fulfil his lifelong passion of achieving something material in the game he loved. This wasn’t a snap decision though, as he had amassed savings which would cover him for ten years; the length of time he had given himself to reach goals.

After convincing his wife it was the right decision, he spent a year visiting the elite European clubs. There, he would study every detail of how the clubs functioned from their youth academies to their training methods in the hope that he would one day be able to collate this knowledge and implement his own vision on a football club.

It was a long road to doing that, as his first job came as a youth coach at Watford. It is said that he only has a year and a half’s experience in football, but in truth he has just over a decade’s worth if we count from the day he joined Watford’s academy team up until the day he left Brentford at the end of May this year. At Watford he would gain plaudits for his coaching abilities which would see him promoted to Academy Manager in 2006.

He was in good company at Watford too. Current Liverpool manager, Brendan Rodgers, had come in to replace Aidy Boothroyd, England U20 manager, and installed Malky Mackay as his assistant while Burnley manager, Sean Dyche, was named as a coach. The quartet have all gone on to be successful managers and it is no doubt that Warburton will have learned a lot from working at close quarters to them.

Warburton left to explore other avenues and his next project saw him found the NextGen series in 2011. The U19 tournament aimed to bridge the gap between academy football and the first team for young British footballers especially by giving them a level of competition they hadn’t been used to, the experience of travelling across the continent and the platform to showcase their talents under the pressure of a TV audience. It was well received by all major European clubs who took part but after two tournaments, it was abolished after UEFA hijacked the idea, rebranding it the UEFA Youth League – which hasn’t had the same positive impact.

It is noteworthy that Warburton’s time spent running the tournament proved beneficial to him when he took over at Brentford as he was able to take several impressive talents on display in the NextGen series including Arsenal’s Jon Toral, Tottenham’s Alex Pritchard and Sporting Lisbon’s Betinho on loan last season.

In 2011, Warburton was appointed Brentford’s interim assistant manager alongside Nicky Foster who had been asked to take over until the end of the season by owner Matthew Benton, someone Warburton knew from the NextGen series as he was one of his backers.

After putting his name forward for the permanent position in the summer, he lost out to Uwe Rosler and instead was appointed Sporting Director. It is quite ironic that the man touted to be the Rangers manager is a trader who has experience of helping run a financially prudent club; maybe he should apply for the CEO and Financial Director’s position too!

In that role he was responsible for dealing with agents and handling transfer negotiations, overseeing the youth academy, scouting young players and discussing the footballing strategy with Rosler.

After discussions with West Brom over the Sporting Director role, he was replaced by Frank McParland, recommended to the club by former colleague Brendan Rodgers, while he succeeded Rosler who had left for Wigan.

This is when the relationship with Davie Weir started, as he was appointed as his assistant manager the following day. Not only did the pair continue the good form seen under Rosler which had them sitting in fourth place, they went their first nineteen games unbeaten while Warburton was the first Brentford manager to win all of his first six games. In his first season he took charge of 27 games winning 17, drawing six and losing four on the way to securing automatic promotion behind a strong Wolves side who under Kenny Jacket had rebuilt well.

Warburton faired even better in the Championship. After being tipped to be in a relegation battle, Warburton led his side to the play-offs after results went their way on the last day of the season. He made Griffin Park a fortress in the process, with the Bees boasting the best home record in the Football League and also won London Manager of the Year 2015.

The speculation surrounding his position in the last few months made his job difficult and it was finally announced in February that he would be leaving the club in the summer along with Weir and McParland. The reason cited was due to a difference in philosophies between the management team and the owner whose mathematics and statistics based model was working well at his other club FC Midtjylland in Denmark.

‘Warburton-gate’ resulted in a noticeable dip in form as they won just five of their last fifteen games in the run-up to the penultimate game of the season. Warburton managed to galvanise his players though as they secured all six points from their last two games to seal the last play-off place where, in the end, they were beaten comfortably by Middlesbrough over two legs despite a fairly even first game at Griffin Park.

In my eyes Warburton is a hungry coach who is full of fresh ideas and is someone who given his expertise in several areas can come in at this delicate time and make his own mark on the club. The board need to take a holistic approach to rebuilding the club while ensuring we achieve the short-term aim of winning promotion which is a tough ask given the circumstances but I firmly believe that Warburton and Weir tick every box.

There will be a follow-up piece to this uploaded tomorrow. Brentford supporter & author of ‘Tales from the football village: (From  Sam Saunders to uncharted territory)’, Nick Bruzon, will be answering some questions on Warburton and Weir’s time at Brentford and how he thinks they will fair at Rangers should they get the job.

5 thoughts on “Warburton & Weir the men to mould Rangers into shape.”