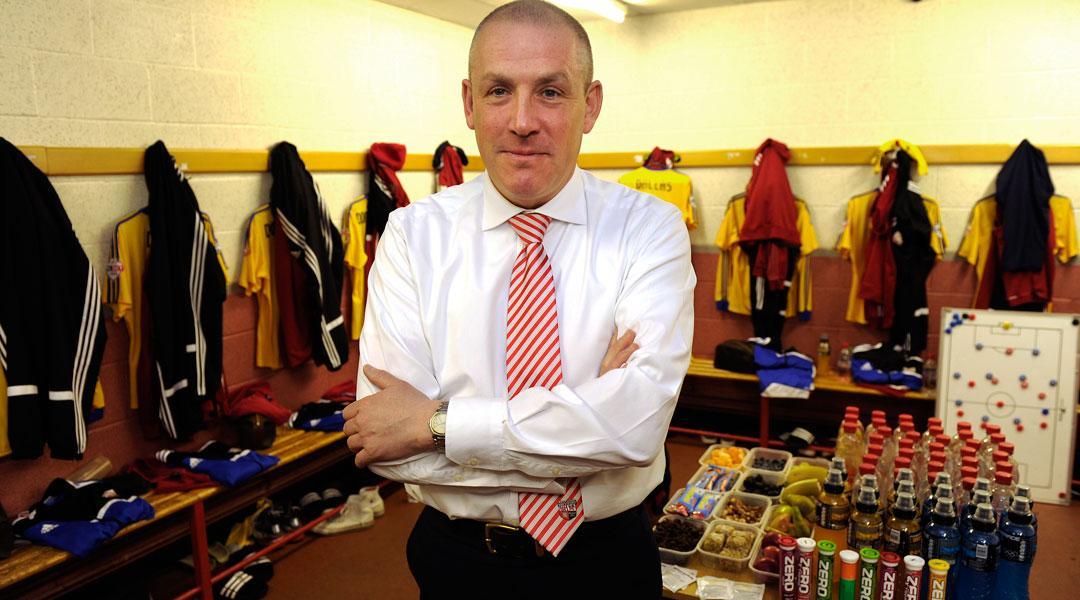 I thought it would be useful to gain some insight into the man thought to be favourite for the Rangers job so I contacted Nick Bruzon, an avid Brentford fan and author of ‘Tales from the football village: (From Saunders territory to unchartered ground), who kindly gave up his own time to answer some questions about the man in question.

Could you tell me what was the most common formation used under his management and give an idea of what brand of football we are likely to see?

What you are likely to see n a Mark Warburton team is attacking football. Whilst we only played with one out and out striker in Andre Gray, the five midfielders (defensively minded Toumani aside), all weighed in with their share of goals. The full backs were really encouraged to push on up to the opposition box and, whilst not suicidal, sitting on a game wasn’t really his style.

We’ve saved so many games in the 90th minute whilst even at home to Bournemouth (eventual champions), at 2-1 up he still had the team push for that decisive third goal to wrap it up.  Four goal scorelines were a semi-regular thing – something unheard of under previous Brentford managers.

A criticism which has been levelled at him is that he only has a plan A and can’t adapt to changing circumstances. Do you agree with this?

It’s easy to be wise after the event ; moreso as we all think we know better than the man in change when things aren’t going as well as they have previously.

Mark is a fiercely loyal manager and stuck to both his hardcore of players and his trusted strategy. Indeed, we used the least players of any team in the Championship. In hindsight, had he changed things around a bit in the final few games of the campaign then the season might have turned out even better than it did.

In relation to the teams in League 1 and the Championship, how big was the budget he had available to him?

Tough one to answer because, officially, all our transfer fees were undisclosed. Relatively small was the general consensus. We signed a couple of players for fees rumoured to be £1m+; we sold Adam Forshaw for a fee rumoured to be approximately £4m (albeit Everton got a large sell on clause).

Put it this way, we had no parachute payments and weren’t anywhere near being able to sign an £11m Ross McCormack as Fulham did or anyone even close to the £3m Norwich were supposed to have found for Lewis Grabban, to name but a few. His ability and connections in playing the loan market were where Mark really made a small budget stretch over the last few seasons.

What were the characteristics of most of his signings in terms of age, value for money and sell-on potential? Was it a quality over quantity approach?

We’ve actually sold very few quality players. Adam Forshaw was the main name to go whilst Clayton Donaldson was out of contract so went to Birmingham City on a free. Otherwise, it has been very much a strategy built around adding exciting, young talent to an existing solid core.

In many respects, it really is a shame that Mark has left because the squad he and the coaching staff had assembled really was full of exciting young, British talent (with a couple of very tasty Spaniards)

Loan stars such as Marcello Trotta and Alex Pritchard have been central to your success over the past two years. Does his contacts within the game help him secure youngsters from established youth academies?

Marcello Trotta – courtesy of the BBC

Absolutely. Forshaw came on loan from Everton, as did Jake Bidwell (FB), both of whom subsequently signed. We’ve also had Chris Long and Conor Mcaleny from them whilst Harlee Dean(CB) has also been a long term regular after coming in on loan from Southampton. Don’t forget Mark was at Griffin Park acting as director of football before taking over from Uwe Rosler as manager.

What is his reputation when it comes to promoting youth to the first-team?

Age is not a barrier. He’s had members of the youth academy on the bench in the crucial Championship run in; likewise at the business end of the League One campaign.

We need a long-term, forward-thinking strategy in place. Can Warburton provide this?

This is what has been happening at Brentford. Whilst Matthew Benham, the owner, has well documented thoughts about the management structure going forward, the squad that has been put together is one that is very much built around the youth and the future.

Does the dynamic between himself and Davie Weir work well in your opinion?

Brilliantly so. They are very much a partnership and, as soon as it was clear that Mark was no longer going to be at Brentford next season, then it was obvious David would also be leaving. Mark has already gone on record as saying that he will bring David with him should he be successful.

Rangers need to hit the ground running this term, how long do you think it would take for him to implement his ideas and could we see a slow start as a result?

Mark won ‘manager of the month’ in his first month at Brentford and was nominated again immediately afterwards. You’d have no worries about his ability to get off to a strong start. That said, he’ll need time to get to know new players, opposition and league but, in terms of confidence, he’s very much a man for whom nobody holds any feat.

A very important question for Rangers fans who are traditionalists like myself: Is he a tracksuit or suit man?

Mark is mainly a suit man. You can stand down.

Last of all, do you believe he would be a success at Rangers?

Absolutely. You are going to get an honest, hard working, fiercely loyal man. Somebody for whom the players had the utmost respect and loved to play for. Somebody whom the fans loved and were distraught when the rumours started in February about that he was going to be released at the end of the season.

Likewise, he is a man who acts with the utmost dignity. Just look at how he carried himself when the news was, finally, confirmed. His performance on SSNHQ, after two defeats during the period of uncertainty, was nothing but full f respect for the owner, the fans, the team and himself. As a means of regalvanising the spirit it was a stunning effort.