If reports are to be believed, Rob Kiernan and Danny Wilson will become Mark Warburton’s first two signings as Rangers manager in the next couple of days.

Mark Warburton is a firm believer in building from the back, and with these two additions it seems like he is assembling his squad in similar fashion too.

But with a depleted squad we could be looking at up to eight new faces coming through the door this summer, and as a consequence it may take time for the team to gel. Don’t get me wrong, we cannot afford a slow start and must find a way to grind out the results in the early part of the season, but we have to manage our expectations and realise that we can’t draft in a whole new team and expect them to produce free-flowing football in a matter of weeks.

This is why Davie Weir’s defensive expertise will be vital during the settling-in period.

A strong centre-back pairing can’t be forged overnight or indeed on the training ground throughout pre-season. They need to play a sustained period of competitive games together in order to gain an understanding of how each other play and to develop an almost symbiotic relationship where their extensive knowledge of each other’s game allows them to complement their partner’s strengths and on the other hand compensate for their weaknesses.

With time, the mechanisms involved in Warburton’s set-up should become second-nature; but that process can be nurtured by a coach who has mastered the art of defending and is able to share the tricks of the trade that he has learnt over two decades in the game. Cue Sir David of Weir.

Warburton has made it abundantly clear that he is intent on producing attacking football, but his Brentford record suggests that his teams can be susceptible to being hit on the counter attack as a result – a problem that dogged our season even up until the very final two play-off games against Motherwell.

That is why I would expect to see a slightly more conservative approach in the first couple of months as three quarters of our defence will still be getting to grips with one another as well as trying to implement Warburton’s game-plan.

Our defensive line last year was consistently far too deep and as a result hindered our midfield. They were unable to press as they would leave a massive hole behind them which, in turn, gave the opposition time on the ball making average players look like superstars.

I would expect that to change with Kiernan and Wilson as they both possess a good amount of pace so the line we hold will be much higher up the park to accompany our pressing, but I think we are likely to see a gradual change in mind-set rather than a radical switch in mind-set.

As well as applying Warburton’s style of play we will need to ensure that we are defensively sound enough to manage the opening few games confidently as the opposition will see this as the perfect opportunity to test our new-look defence. And who better is there to set-up a defence than Weir? Although the flat, rigid back four he was part of under Walter Smith may be very different from Warburton’s ideal, he was the leader of that line and his positional understanding was second to none.

I have no doubt that Weir’s tried and tested methods along with Warburton’s well researched and more modern coaching will be able to offset the unfamiliarity there is bound to be by laying out a clear vision of how they wants the back-line to function as a unit.

Kiernan – Courtesy of The Sun

Eustace will protect new-look defence – Courtesy of The Derby Telegraph.

Wilson will be looking forward to recapturing his pre-Liverpool form under the guidance of his former mentor, while Weir will be looking to polish the rough diamond that is Kiernan into the finished article. The signing of Eustace could also be very important in the early months of the season too as he would act as a further layer of protection while the back four acclimatise to their new surroundings.

Although we can’t afford to prioritise the defence over the other departments of the team, if there was one area that you had to make sure was vastly improved ahead of this season it would be in centre-half.

The prospect of having two ball-playing centre-backs in their early twenties with a point to prove is an energising thought. And with Marius Zaliukas and Darren McGregor already at the club, you would think that would give us enough options at the back, especially when you consider that we have Luca Gasporotto back from his successful spell on loan at Airdrieonians. 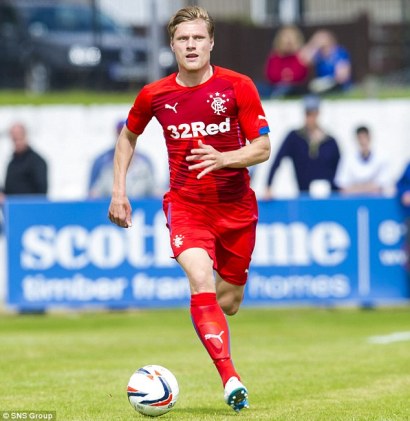 Courtesy of The Daily Mail 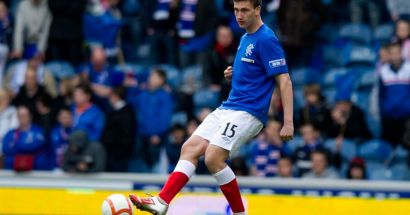 Courtesy of The Daily Record 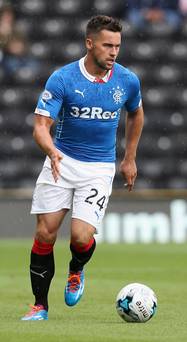 Courtesy of The Belfast Telegraph

But even though McGregor and Zaliukas formed a half-decent partnership near the end of the season, I don’ think either will be suited to Warburton’s style of play as both are clumsy on the ball and don’t read the game as well as is needed if you want to play a high-line.

That’s why I wouldn’t be surprised if last year’s Player of the Year didn’t feature much at all next season and even less surprised if the latter was shipped out to be replaced by someone more akin to Warburton’s philosophy such as Brentford’s Alfie Mawson or Danish U21 international Jens Jonsson.

Alfie Mawson – Courtesy of the BBC

With the season getting underway in only a matter of weeks on July 25th, Weir will be a steadying influence on what is going to be a refreshingly youthful squad on the whole. When St Mirren come to Ibrox on the first day of the league season I’m sure that the work Weir especially will have been doing with the back four will make last season’s bombscare defence nothing but a mere distant memory.

4 thoughts on “Weir can stabilise a gelling defence”