Since signing for Sheffield Wednesday last year, Stevie May has struggled to replicate the form that saw him score 77 goals in just 112 matches during spells at Alloa, Hamilton and parent club St Johnstone prior to his big-money move.

The rumour-mill has been in overdrive when Rangers are concerned as agents try to secure their players a move, but this deal seems a realistic possibility as it is in line with Warburton’s philosophy of signing young British talent with potential to improve.

I spoke to Laura Jones, Sheffield Wednesday’s fan columnist for The Star, who gave an insight into the striker’s situation and what he would bring to the side should he move north of the border.

Rangers are not the only team credited with an interest in the forward though as Aberdeen boss Derek McInnes is believed to be keen on re-uniting himself with May, who he gave his senior debut while in charge at Saints.

However, Laura doesn’t believe there has been any contact from any clubs over the player. She said: “I’ve not heard anything formal. It all just appears to be speculation and newspaper rumour at the moment. I’ve not seen any English clubs expressing an interest either.”

Wednesday parted company with manager Stuart Gray after the season ended as the new owner looks to restructure the management side of the football club. Despite the media conjecture, no replacement has been brought in yet, and with that in mind I suggested to Laura that this may be the best time for Rangers to make a move while there is still uncertainty. She said:

“Cooper and Carvalhal haven’t been confirmed yet. We’re very much in the dark over who will be in what position and who will make the final decision over players.

“Unless May wants to leave Wednesday I would say this is a harder time for him to leave the club as there is no one to negotiate with. He still has 3 years of a 4 year contract so Rangers would have to pay a decent sum if they are going to prise him away from Hillsborough.”

Rob Kiernan became our first signing to have cost a transfer fee since we signed David Templeton over two years ago so there is clearly money to spend. But at just £200,000 a player of May’s calibre is going to cost considerably more. I put it to her that our financial constraints may limit us to a loan rather a deal where they would recoup the majority of their initial outlay. She said:

“The Owls aren’t going to want to lose out financially on May. £800k was a big investment for us at the time. We have been assured by the new owners that there is money to spend so a loan could be a possibility but until we have a finalised management structure there’s no way of knowing whether May is part of their plans.”

But she also revealed that Wednesday’s squad are in more of similar position to us than some of us might be aware of, adding: “If things stay as they are then May will be involved as we currently only have 13 senior players on the books.”

May’s seven goal tally last year was underwhelming for a player who looked ruthless in front of goal in Scotland, but when I asked whether that was down to a lack of service or poor finishing, Laura suggested it was a combination of both:

“Wednesday struggled with creativity last season and it showed with us being one of the lowest scorers in the league. May probably didn’t make the most of his opportunities and by the end of the season it was hit and miss as to whether he was even given a starting position.”

May has been a source of frustration for the Owls faithful. It is clear there is talent there but so far he hasn’t been able to channel it a way that produces a more efficient return for their investment. Laura said:

“He gets into some good positions but he does seem to get dragged out of position very often. He mainly drifts to the right hand side. With better service on that wing he may spend more time in the box. Again it’s an unknown. He was prolific with St Johnstone, it’s just figuring out how to get the best from him. It maybe the plain truth that he lacks the quality for the Championship.”

However, it may just be a case of needing time to adjust as he seems to have a good standing amongst the supporters. “He seems to be well liked amongst the fans and has scored some important goals.” Laura said before adding, “We’d just like to see more.”

Rangers have been sorely lacking a natural goalscorer in the past few years. Nicky Clark was expected to fill that void after he bagged over 40 goals in one season for Queen of the South but unfortunately he doesn’t look up to the task, while Kris Boyd’s return ended sourly with the former penalty box predator looking unfit for purpose. 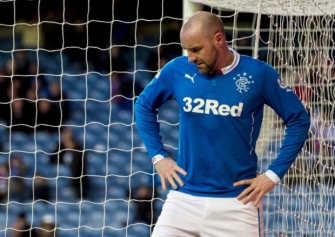 Kris Boyd – Courtesy of The Scotsman

But Warburton’s style of play requires more than someone with a ruthless streak in front of goal; they need to be the focal point of attacks. Being able to bring other players into the game is a necessity when you are playing with a fluid system such as he does while intelligent movement is pivotal in order to occupy the two centre-halves. I asked Laura for a brief synopsis of his attributes and tendencies. She said:

“Like I said he has instinct to drift to the right side which means he’s not in the box to be an out and out striker. He’s also quite lightweight on the ball. He gets shrugged off easily and the Championship is not the place to show that kind of weakness to defences. He knows where the net is. When he’s in the box his instincts are good and he can use his feet and head well. He works hard but not always to great effect.”

To finish, I asked whether she thought he swap the English Championship and reject the Scottish Premier League in order to join Glasgow Rangers. “Difficult to say. He may feel that Rangers is a big enough draw for him.”

Courtesy of The Daily Mail

Courtesy of The Daily Record

Make of that what you will but in my opinion this would be a magnificent coup for the club considering where we find ourselves and would reaffirm what has become apparent in the past couple of weeks: the charm of Rangers is still very much alive.

One thought on “Owls striker to be perched up at Ibrox come what May?”