One of the new features that will be included as part of our Analytical Match Reports will be an advanced stat that rates a goalkeeper on the effectiveness of his distribution.  It will be part of a larger study that I am conducting to see what impact goalie distribution can have on possession & what is the most practical way for a goalkeeper to establish effective possession.

This Goalkeeper Distribution Rating (GDR) goes beyond recording a goalie’s pass completion ratio, rather it measures what percentage of his distribution ends up with the team establishing possession in the opposition’s half of the pitch.  So if it’s a long ball – is it  controlled by a teammate?  If it’s a shorter pass – are his teammates able to bring it up to the offensive end of the field?

Even though the emphasis is on the goalkeeper, his rating is largely reliant on his teammates – how effective are his targets in the air on long balls & how well do his defenders bring the ball out of the back?  Additionally, you can see the effect of a team pressuring higher up the pitch can have on the opposition & what are the best ways to combat that pressure.

Another aspect I am tracking is the success rate of the four means a goalie has of distributing the ball — the long punt up the pitch, a shorter pass, throwing to a teammate, & rolling the ball to a player.   Towards the midpoint of the upcoming season,  I will publish some of these findings.

There are some disclaimers:

Some samples from the summer:

Of all of the matches I have tracked this summer, Donis Escober’s distribution in a Gold Cup game against the United States had the highest rating.  It should be noted he only had 18 distributions (the lowest amount of any goalie I’ve tracked) but 15 of those distributions resulted in Honduras establishing possession in the United States half of the pitch.  Of all the balls he played, 89% were played from the back.  Escobar is a 34-year old veteran who has spent his entire career with the top club in Honduras, Olimpia, & is currently a teammate of a player many of you know very well – former Rangers midfielder Arnold Peralta.

Set to be the new Manchester United goalkeeper, Romero’s distribution rating against Chile in the Copa America final was an example of how an opponents pressure up the pitch can impact a goalkeeper’s intentions.   Romero wanted to play shorter balls but was forced to rely on long balls the majority of the time in an attempt to force Chile back up the pitch.  When he did play the ball short his GDR was 0.64, however when he went with a long ball it dipped to 0.33. 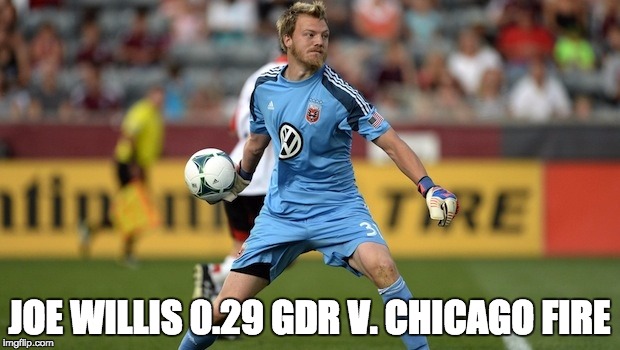 It took a Major League Soccer match between the Chicago Fire & Houston Dynamo to really wonder if the two managers even gave instructions to their goalkeepers on what to do with the ball.  Houston coach Owen Coyle watched his keeper Joe Willis (a reserve in his only game of the season so far) rely on a long punt up the pitch on 26 of his 28 distributions.  The results were a 0.29 GDR overall, meaning the opposition gained regained possession 71% of the time.  The other keeper in the game, Sean Johnson (once tabbed to be a future national team keeper for the United States) was even worse.  His overall GDR was 0.25, with 19 of his 24 distributions being long balls.  His GDR on long balls was 0.16 – meaning Houston regained possession 84% of the time.  It truly was an exercise in futility.

As I mentioned before, this new Goalkeeper Distribution Rating will feature in most of our Analytical Match Reports & the complete results of the ongoing study will be released later this year.

Your questions &/or comments are very much welcome given this is my first attempt to track games in any way.