Note:  normally we will provide a cap for how many minutes a player will have needed to play in order to be considered for any per 90 minutes statistics – but it’s only week one.  Let’s be be a little reckless!

Oh, this is a ridiculous stat to look at after only one week (but extremely enlightening as more of the season passes).  The 23-year old came on as a sub in the final 20 minutes & scored an extra-time goal in Raith’s 3-0 victory. 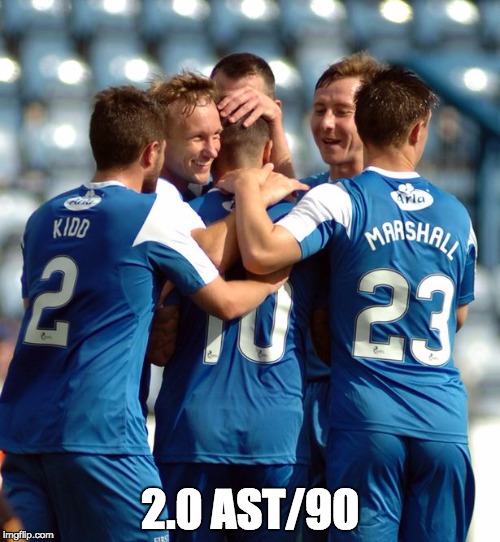 Assists per 90 minutes:  Jordan Marshall, Queen of the South

The 18-year old assisted on two of Queen of the South’s three goals in week one.

The Rangers forward continues to get his chances, five shots against St. Mirren – three coming from within the penalty box.  It’s still early & his finishing needs refining, but if he keeps creating shots for himself – the goals should follow soon after.

Shots on goal:  Iain Russell, Queen of the South

The veteran dominated the offensive output in the victory over Alloa Athletic.  Russell had six of Queen of the South’s 13 shots & scored two of their goals.

This advanced stat developed by Bill Reno & American Soccer Analysis is explained in this introductory post & really is not meant to be a short-term stat to look at, but our mantra after week one is to have a little fun with the analytics.  Cuthbert was the only keeper to get a shutout this week, so he ascends to the top of the list.  This stat will become much more relevant as the months go on to assess how well a goalkeeper is performing compared to his expected results.

If there is an advanced stat to evaluate managerial performances (besides actually winning matches) it’s this one.  How well did a team do compared to how they were supposed to do?  Dumbarton’s upset of Hibs sends new manager Stephen Aitken to the top of table.