The minimum minutes played to be considered is 180. 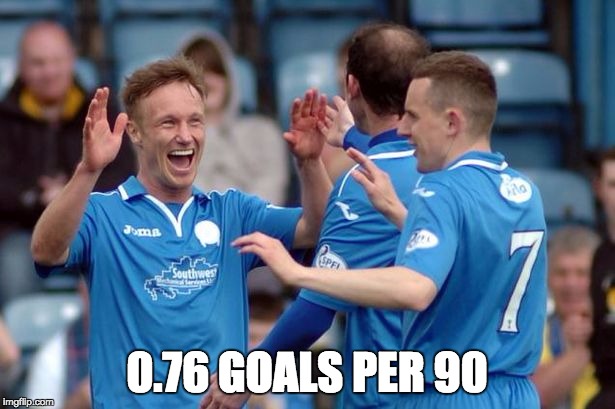 Non-penalty Goals per 90 minutes:  Iain Russell, Queen of the South

The former Celtic youth player is on loan from Birmingham City & spearheading a Morton side that is stockpiling shots on goal.  Johnstone has 12 shots but only three have been on target.  He has yet to score but no player in the Championship should have scored more.  So either he is a safe bet to score very soon or…

This advanced stat for goalkeepers is explained in this introductory post.  The former Aberdeen keeper was thrust into action after Mark Ridgers went out to an injury.  The player coach has yet to give up a non-penalty goal in two matches.

The following players retain their spot on top of the leaderboard from last week.

Note: Martyn Waghorn actually leads the way with 1.09 points per 90, but that included three penalty goals.