The minimum minutes played to be considered is 340.

Points per 90 minutes: Liam Henderson, Hibs –  the on loan youngster from Celtic has found his form for Hibs & has done more than enough to make the supporters forget about Scott Allan.  He has goals in the past two matches, both of which were the first goals of the game, & has also chipped in two assists.  Next best:  Barrie McKay, Rangers 0.90 & Lee Wallace, Rangers 0.79  Give them more minutes:  Jordyn Sheerin, Livingston 1.48 in 61 minutes & Jon Scullion, Morton 1.45 in 62 minutes

Goals per 90 minutes:  Lee Wallace, Rangers – what were the odds that Wallace would be among the most prolific goal scorers in the Championship at the beginning of the season?  Next best:  Jason Cummings, Hibs 0.60 & Iain Russell, Queen of the South 0.52  Give them more minutes:  Jordyn Sheerin, Livingston 1.48  & Jon Scullion, Morton 1.45

Expected Goals:  Martyn Waghorn, Rangers – while he only has two goals in the run of play during league play, Waghorn is generating more quality chances than anyone else & if he continues his strong play he will soon be slotting home more non-penalty goals.  Next best:  Jason Cummings, Hibs 2.72 & Denny Johnstone, Morton 2.50

Goal Scoring Efficiency Rating:  Jason Cummings, Hibs – this experimental stat, unique to Rangers Report, is explained here & really functions as a way to identify players who are producing the most, relative to the possession trends for their team.  The 20-year old may not be a favorite with Rangers supporters, but has proven to be a player who is  is among the best in the Championship.  Next best:  Iain Russell, Queen of the South 0.012, Lee Wallace, Rangers 0.011 & Liam Henderson, Hibs 0.011 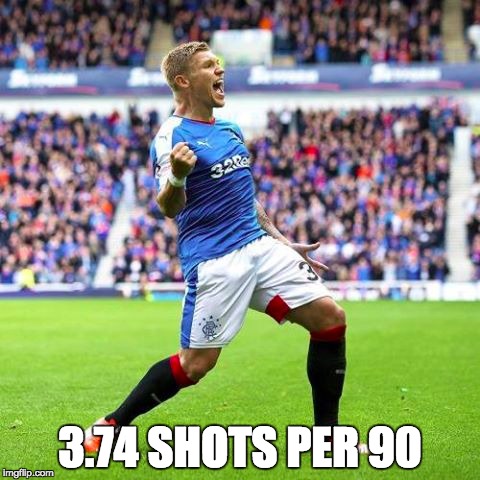 Goals minus Expected Goals:  Derek Gaston, Morton – This advanced stat for goalkeepers is explained in this introductory post.  Gaston has been one of the most effective goalies in the Championship given the sheer volume of shots he’s faced & the lack of goals he’s given up.  It’s the basic expectation of a goalie – stop the shots that come at you.  He has had 29 shots on target to save & has only given up three goals.  Morton has a very offensive approach to its game & Gaston has been the backbone that has kept them in each of their matches this season.  Next best:  Jamie Langfield, St Mirren -0.07 & Mark Oxley, Hibs 0.34