The minimum minutes played to be considered is 550. 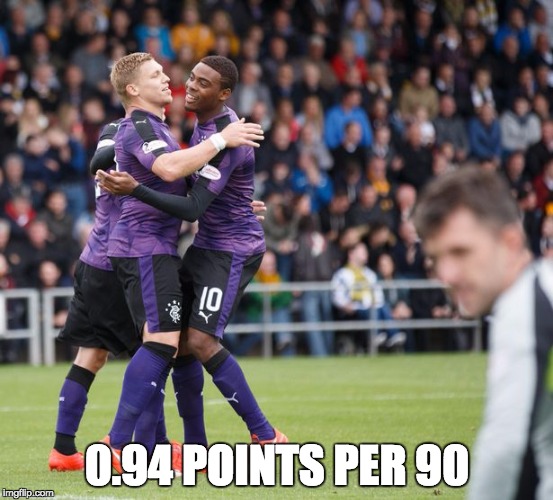 Points per 90 minutes:  Martyn Waghorn, Rangers – for a while this season Wagorn’s statistics were being carried by his seven penalty goals.  But that has not been the case of late as he has compiled five non-penalty goals & five assists in 11 matches this season.  Next best:  James Tavernier, Rangers 0.75 & Barrie McKay, Rangers 0.66.  Give them more minutes:  Jon Scullion, Morton 0.97 in 93 minutes & Jordan White, Livingston 0.92 in 392 minutes 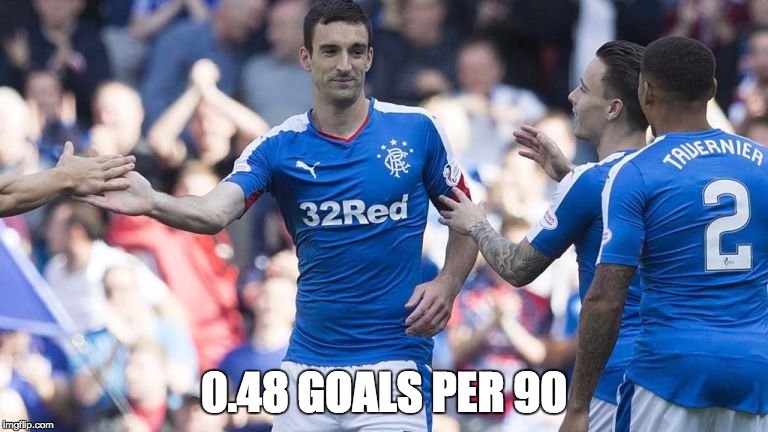 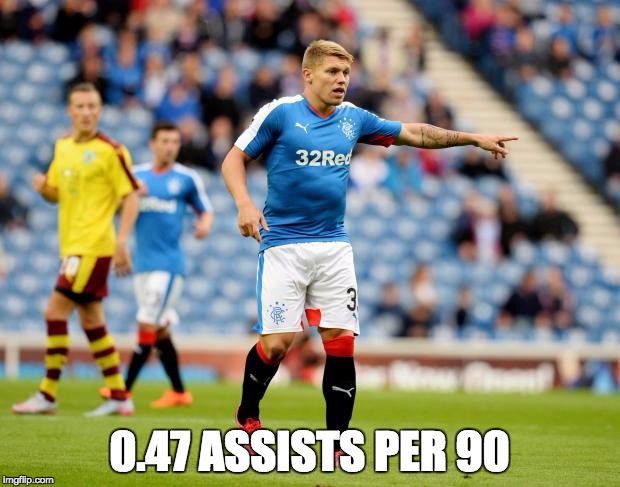 Assists per 90 minutes:  Martyn Waghorn, Rangers – it’s time to begin the Player of the Year campaign for the Rangers forward, who not only has found his scoring touch but it also getting an assist in nearly every other game.  Next Best:  David Smith, Falkirk 0.47 & Lewis Stevenson, Hibs 0.45.  Give them more minutes:  Romario Sabejo, Morton 0.50 in 179 minutes & Jordan White, Livingston 0.46 in 392 minutes

Expected Goals per 90 minutes:  Kenny Miller, Rangers – for the record Martyn Waghorn has the most Expected Goals in the Championship with 4.24 – but the surprisingly leader per 90 minutes is Miller.  This is a bit of a shocker given his dry spell in front of goal.  But, the chances are still coming with 17 shots in 561 minutes & is averaging 1.93 High Danger/Very High Danger shots per 90 minutes.  If he continues this way, the goals are likely to follow.  Next best:  Dominique Malonga, Hibs 0.42 & Martyn Waghorn, Rangers 0.40.  Give them more minutes:  Jordan White, Livingston 0.57 in 392 minutes & Jon Scullion, Morton 0.54 in 93 minutes

Goal Creation Rating:  Martyn Waghorn, Rangers – this stat, unique to Rangers Report, is explained here & is an attempt to evaluate which players are the best at creating goals for their team (goals & assists) when their team actually possess the ball.  What makes Waghorn’s rating so impressive is that the stat tends to favor ‘diamonds in the rough’ – players who are creating goals on teams with low possession numbers.  As most of you know, Rangers have the best possession stats in the league so Waghorn’s production is not just a byproduct of that & he really is performing at another level lately.  Next best:  Liam Henderson, Hibs 13 & James Tavernier, Rangers 13.  Give them more minutes:  Jordan White, Livingston 20 in 392 minutes & Lawrence Shankland, St Mirren 17 in 381 minutes. 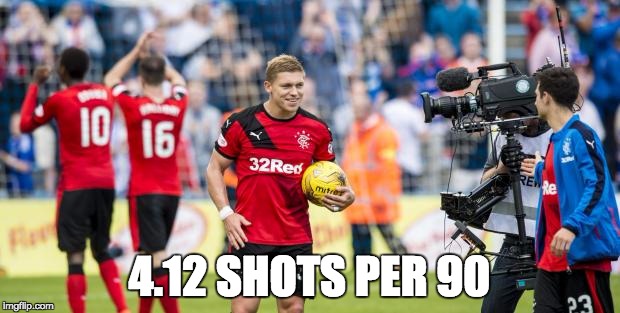 Goals Minus Expected Goals:  Jamie Langfield, St. Mirren – This advanced stat for goalkeepers is explained in this introductory post.  The former Aberdeen keeper has had a fantastic start to his St. Mirren career.  His Expected Goals Against is 5.14 & he has only allowed seven goals.  Part of his success is a league high 0.833 save percentage of the 42 shots on target he has faced.  Next best:  Wes Foderingham, Rangers 1.97 & Derek Gaston, Morton 2.80.  Watch out for:  Marc McCallum, Livingston 1.73 in 360 minutes – the on loan goalie may be a real game changer for Livi – whose previous keeper had the second worst GMXG in the league (9.72).