All of the indicators point towards relegation for Alloa & this match represented the extreme polar opposites of these two clubs.  Rangers went into half-time with a three goal lead & a 2.1 to 0.3 lead in Expected Goals.  Credit to Rangers for being relentless in their search for a fourth goal as they completely dominated throughout the 90 minutes. 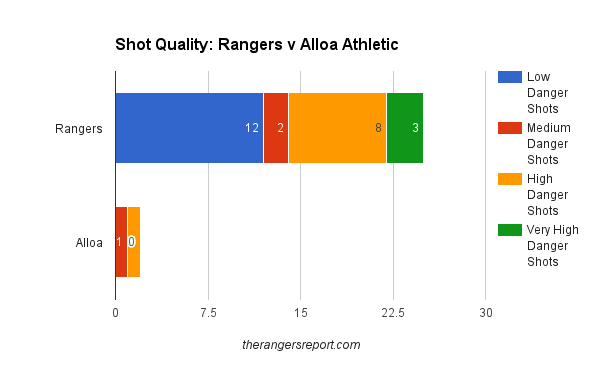 Clinical domination was the pervading theme of this game.  Of Rangers’ 25 shots, 52% came from within the penalty area & 44% came from High/Very Danger areas.

Alloa never had a chance as Rangers turned 70% of the possession into 93% of the shots, 100% of the shots on target, & 92% of the Expected Goals.  This will serve as a satisfying boost for Rangers going into their week off. 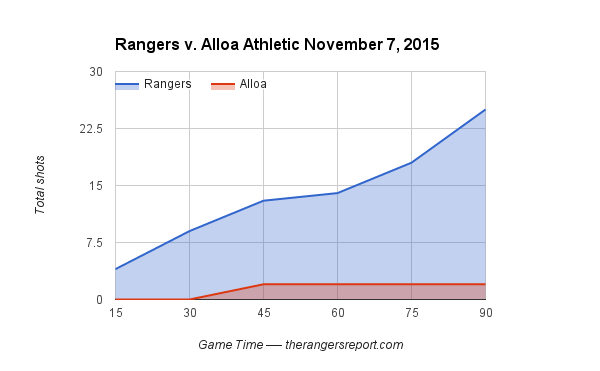 Rangers hit a bit of a lull to open the second half, but Edward Ferns’ dismissal in the 79th minute opened the flood gates as Rangers seemed possessed to get a fourth goal to send the fans home happy.  Nicky Clark’s goal capped five shots that came in the final six minutes of the game.

Hands down, the most dominant performance by any forward in the Scottish Championship this season.

Alloa had no answer to James Tavernier in this one as he piled up two points & had 14 Controlled Entries into the final third.  Rangers got three shots as a result of those CZE from the right back.

Barrie McKay bounced back from a quiet outing last week, with a brilliant performance against the Wasps.  His 13 CZE balanced out the attack with Tavernier driving possession into the final third out on the right side.

Andy Halliday & Gedion Zelalem combined for 14 Controlled Entries into the final third as Rangers effectively diversified their efforts to break down the Wasps in the final third.