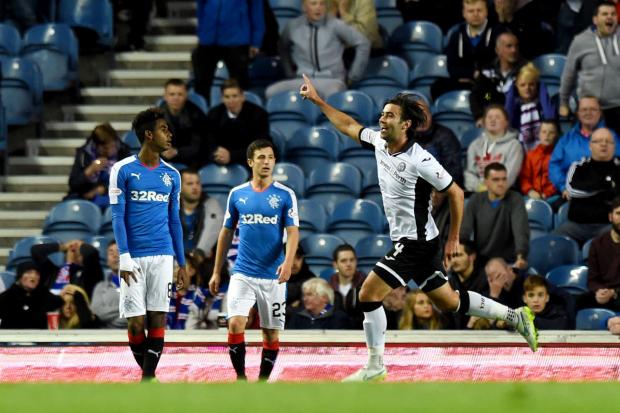 An exciting addition to the data that this site provides is the work of Mike Driggs, who runs the Rangers Supporters Club in Portland, Oregon.

His Goal Creation Graphs chart how each Rangers goal is scored – from where the play begins, to how the ball is worked forward towards the glorious culmination of a Rangers goal.  We also can examine what happened on goals that Rangers conceded – where the breakdowns are occurring & what patterns are forming?

Realize that these graphs are in their pilot phase & Driggs expects to enhance them moving forward.

In order to add some insight to our Goal Creation Graphs, I sought out the services of two writers who regularly write about tactics to analyze all of the goals that Rangers have conceded this season & a few selections of goals scored.

First, I reached out to TT from Spielverlagerung.   TT is a football tactics blogger whose work can also be found on his own  blog – The Flying Wingback.  He also contributes his services for Onside Analysis.

It should be noted that TT has yet to watch any of Rangers games this season, but he was kind enough to share his insight based on the Goal Creation Graphs.

Then, I asked Rousseau, who writes for GersNet, to share what insight he sees in the graphs.  His analysis had that foundation of seeing the goals play out in real life & then having the opportunity to see how they looked in hindsight through Driggs’ graphs.

TT:  Firstly, from the conceded diagram we can see four goals have come from corners. This is an unusually high amount as I understand a goal is normally scored every 60-75 corners. I doubt Rangers have conceded upwards of 250 corners this season

Editor’s note:  Actually, Rangers have only allowed 33 corners in league play.  The next best team is Hibs – who have allowed 66 corners.  So, Rangers have done an excellent job of not allowing large numbers of corners through their dominant possession – but when they do give up a corner they are very susceptible to being scored on.

Rousseau:  Four goals conceded from corners, both directly and indirectly, suggesting we’re not too great in the air!  Four headed goals from thirteen conceded is a significant amount, 30% in fact.

Rousseau:   The left-back slot seems to be an area of weakness, with several goals coming from this flank — no surprise really when you consider how far forward Lee Wallace usually plays!  Although it is interesting that no penetration comes from the right side: perhaps James Tavernier is getting back quicker, or perhaps the opposition prefer to target Wallace?

TT:  Also, there is an unusually low amount of goals conceded from crosses even though crossing is a default final third strategy for many teams these days. This lack of goals conceded from crosses may be due to high quality fullbacks in one v. one defending, centre backs that are good at heading and clearing the ball, or a goalkeeper that is comfortable coming off his line to catch/punch a cross.

TT:  However, I would suggest it is more to do with Rangers not giving up much space in wide areas. I can tell Rangers’ defence probably play with poor horizontal compactness due to the amount of goals conceded from vertical passes straight through the middle.  Rangers are blocking wide spaces however conceding vital central space as a result of this.

Rousseau:  Opponents seem to be able to play long, direct passes through our midfield, suggesting we are not cutting the passing lanes, or getting caught out of position on a counter.

TT:  Rangers have indeed conceded many through long vertical passes through the centre of the field. This shows that maybe you have poor aerial ability in first and second ball situations. Or, you are poor in getting into shape during a defensive transition.

Rousseau:  The long (-ish) passes look to be through balls, which suggests our centre-backs are failing to deal with them by not cutting the passing lanes, covering the man rather than the ball.

Five  attacks start deep in the opponents half. Two were goal-kicks, which were unchallenged, and two were interceptions. Route one seems to be an issue as we are not winning our aerial duels, and counter-attacks seem to be a problem, whereby we lose the ball far up the pitch and can’t get back.  It seems like opposition players are able to run with the ball centrally, rather than being pushed wide where I assume it would be easier to deal with. Again, perhaps we are caught out of position, and perhaps there is more space?

Aerial encounters are challenged in the box — as one would expect, considering it would likely be a corner or free-kick, so we have time to organise — but there are few challenged aerial duels in the middle of the park.

Most attacks are central, which suggests that Andy Halliday is not doing well enough as a defensive midfielder, or he is isolated. Four goals were scored from outside the box, which suggests we’re not closing down, and giving them too much space.

Most of the goals were scored towards one side, so it would be interesting to find out which half they were scored in: were they early or late in the game? There might be a pattern there, or it’s completely random.

TT:  The graphs, especially the Alloa one show Rangers are a team that like to play short, quick passes on one flank before switching play with longer, diagonal and horizontal passes to find space that has opened up on the other side of the field. This is an effective final third strategy.

All of the goalscoring graphs show a team that like to move from middle third to final third in wide areas, where there is more likely to be available scores.

In the Peterhead game, Rangers score twice from ball recoveries in the opposition half, this shows that Rangers obviously decided to press/counter-press more intensely in this match as possibly Peterhead are vulnerable under pressure.

However, they didn’t score directly from an opposition half ball recovery in any other match I looked at.

Rangers also like to penetrate the penalty area via the flanks, be it through a cross, or a dribble behind a full back.

Overall, the main tactical point I can gauge from these diagrams is that Rangers play with width and control wide areas. They use this effectively in attack although may wish to be a bit more horizontally compact in defence.

You can read Rousseau’s work on GersNet.