It is easy for a team that is averaging three goals per game to become complacent.  When you have outscored your opponents by 31 goals it is even easier to take for granted that the goals will keep coming.

You know what?  They probably will.

But, the task taken on by Mark Warburton & David Weir goes far beyond winning the Scottish Championship.  That’s why they openly emphasize the need to analyze the performances of their players & of the team as a whole.  They are constantly looking for entry points for growth & that’s what has inspired this examination of which players are putting themselves into position to get quality shots on goal & which players are struggling to make the most of those chances.

The goal of this post is to add another layer to that analysis by evaluating the finishing prowess of each player in relation to where their shots are being generated.

First, let’s look at shooting percentages in conjunction with xG per shot.  It should be noted that the players who have yet to score this year were removed from the list in order to not skew the averages.  But a couple of those players will be referenced later.  Also, penalty shots were not included, so all of the following data comes from the run of play.

Again, I have borrowed from  Carolyn Wilke in terms of how each data set is labeled.

The shooting percentage (goals/shots on target) is along the vertical axis & the Expected Goals per shot runs along the horizontal.

The next logical step in this examination is to look at the other aspect of finishing that is critical to a player’s success – can they actually get their shots on target?  It’s hard to beat the goalie if the ball is sailing into the sea of punters behind the goal.  The following charts shooting accuracy (shots on target/shots) & xG per shot. 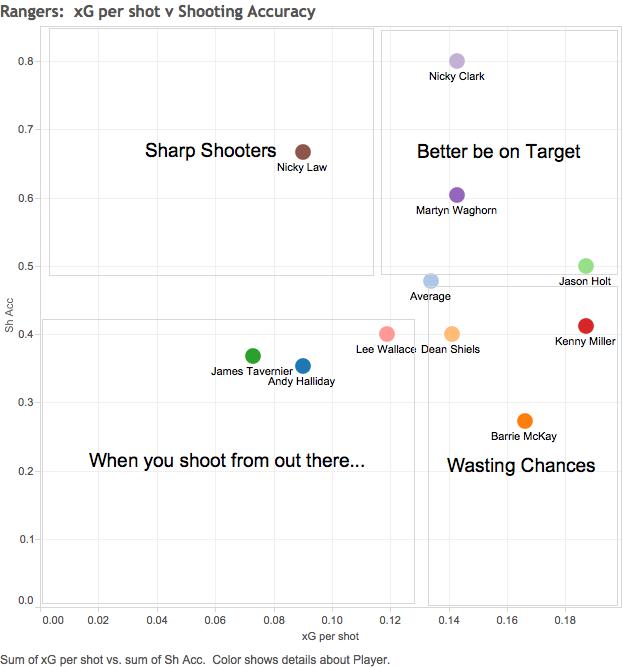