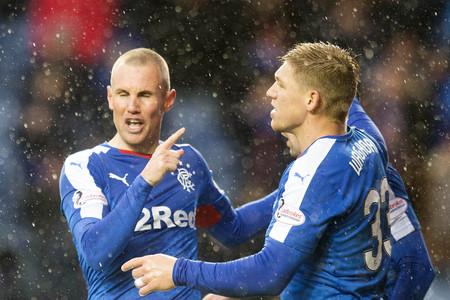 That was much, much better. And, if we look at the game objectively, it was 4-0 going on eight. After coming in for some criticism this week, Rangers bounced back in emphatic fashion. Before Jason Holt broke the deadlock in the 34th minute, Rangers had already squandered some very good chances – Kenny Miller and Martyn Waghorn being the main culprits, but both would cap good individual displays by grabbing a goal apiece in the second half – Miller’s was a particular highlight because it came at the end of a superb passing move.

Sean Kelly’s own goal added some gloss to the dominant display, but St Mirren should be very disappointed. It was the worst they had played against Rangers all season, and should be thankful that the result was only 4-0.

For Rangers, it was just what the doctor ordered – fantastic.

I usually single someone out, but not this week. It was a good team performance that was littered with five or six very good individual displays. So the team deserve a massive pat on the back. We wanted an improvement on Livingston, and they duly delivered.

Mark Warburton and Danny Wilson spoke to Rangers TV after the victory.

Warburton said: “I’m delighted for the players. They have worked hard and trained hard with good commitment and quality. It was a very pleasing first half performance today, and we should have been more than one ahead at half time, although to get the rewards late in the game was, of course, pleasing.

“So we look forward to final now in April.

“In that first half there was just a little bit of quality missing in the final third. Don’t forget they are working so hard, but we had some different shape and movement today, and the combinations nearly came off.”

Wilson was happy to be back in the starting line-up, and he said: “We came in this season and it was one of the goals to get to the final and it’s something we can look forward to.

“The team are pleased to be back to winning ways after last week’s disappointment, dropping points, but we are just happy to get a good performance under our belts and it means we’re in the cup final.

“It’s something to look forward to now but it will be at the back of our minds now as we go back to the league on Tuesday.”

Kenny Miller‘s 77th-minute strike was his first goal in three months; his previous goal came in the 5-1 rout of Alloa on the 16th of August.

Stuart Carswell hitting the crossbar for St Mirren – if the game goes to 1-1, then it could’ve been a different story.

Can't knock a cup final day out. That'll do.

Delighted for the players they fully deserved the result. Looking forward to hopefully giving the supporters the first trophy

Much better performance today & deserved to win the game by more than 4 goals. We need to keep playing our style of football.

Much better performance today & deserved to win the game by more than 4 goals. We need to keep playing our style of football.

ROAD TO THE FINAL

Rangers will look to move three points clear at the top of the Championship when Dumbarton visit Ibrox on Tuesday evening.