If you replayed this match over & over again, Rangers would come out the winner nearly every time.  Morton’s two goals came on isolated mistakes by Rangers defenders – both resulting from indecisive play.  Morton was undoubtedly a threat on the counter but Rangers were prepared to handle that threat…outside of the two excruciating, glaring mishaps. 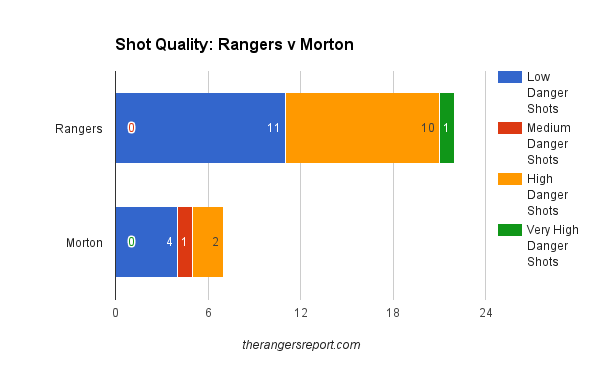 The stats would suggest that the critique of what Rangers did with their possession advantage may be a bit overblown.  Full credit to Morton for a couple of things, actually being able to get ahold of the ball themselves & play opportunistic football.  Rangers averages 66% possession in matches this season & against Morton that “dipped” to 61%.  Obviously, Jim Duffy‘s plan was to play counter attack football but the directive was also in place to not be afraid of pressuring the ball when Rangers had it, especially in the first half.  The main criticism of Rangers play would be the difference between their Total Shots Ratio & Shots on Target Ratio.  They created opportunities, but the aforementioned shooting percentage from outside the box suggests that shot selection was a definite issue that needs further examination.

It should be noted that the Total Shots Ratio stayed relatively steady throughout the match for Rangers.  I point this out because the substitutions at the hour mark & then again in the 73rd minute did not move the needle in ways they have in the past.  Gedion Zelalem & Kenny Miller had individual TSRs of 75% & for the match the team had 76%.  The same goes for Barrie McKay.

Morton literally turned long balls from Grant Adam into 50/50 balls.  Usually these are more like 30/70 balls but Rangers really struggled to win the ball off the goalie’s punts up the pitch.  Obviously this was highlighted by Rob Kiernan’s miscue.  Overall Adam went long 92% of the time & Morton gained possession in Rangers half 46% of the time (28% is the norm on long balls).  Wes Foderingham didn’t see much of the ball but when he did he went short 87% of the time & Rangers turned that distribution into possession in Morton’s half 92% of the time.  It should be noted that the Rangers TV cut away from play to show replays quite often once the goalie had the ball – so there is a margin of error here.

It was a curious decision to yank Kenny Miller from the match in the 61st minute.  His 0.71 Expected Goal total represents 30% of the team’s xG for the whole match (he took 14% of the team’s total shots & 23% of the team’s shots at the time of his substitution).

Martyn Waghorn had a quiet first half, but became Rangers biggest threat to score in the second half & obviously it was his tally that helped Rangers salvage a point on Saturday.

It was definitely a mixed bag from James Tavernier whose own goal will be a lasting memory from this one.  However, his assist from the free kick to Kenny Miller shouldn’t be overlooked.  Beyond that though, he didn’t provide as much of a threat as he normally does.