Dumbarton knew it has little, to no chance of gaining points on Saturday so they went all-in on playing for a 0-0 draw.  Surprisingly, especially considering the final score, it did kind of work for a little while.  The home side always had 9-10 men behind the ball, defending in layers & Rangers did struggle for a while to create chances.  However, Rangers have gone through this routine before, stuck with their game-plan & obviously it paid off right before half-time.

Of the shots that Rangers took, 60% came from within the penalty box & 45% came from High/Very High Danger areas (the heart of the box).

Rangers turned 75% of the possession into 91% of the totals shots on goal.  Those shots translated into Rangers earning 90% of the Expected Goals in the match & 100% of all the shots on target.  In a road match…

The league average for shooting percentage this season is 0.305, meaning 31% of all the shots on target have beaten the keepers in the Scottish Championship.  Prior to this match, Rangers shooting percentage was a league best 0.389 – which you would expect.  So when Rangers put six past the keeper, you’d look for a shooting rate that was off the charts & while beating the goalie on 46% of the shots on target is high – it’s not ‘drop your jaw’ high.  It is not unheard of for Rangers to get 20 shots (they average 17.5) but what’s most impressive is the 13 shots on target.  The difference was that against Dumbarton 65% of their shots were on target when normally they get 42% of the shots on target – which is fifth best in the league.  If this is the beginning of a new trend then we have pinpointed a real area of improvement for Mark Warburton’s team. 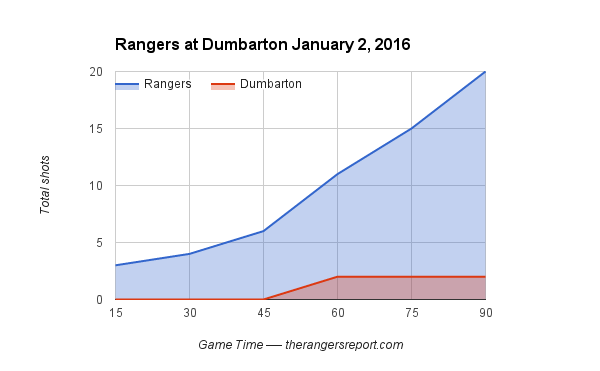 Rangers only had six shots going into half-time, well below their normal rate.  Of course, Dumbarton has zero shots at the half so…there was that.  When Kenny Miller got the second goal it was the 11th shot in just under an hour.  That seemed to really deflate the home side as they were outshot 9-0 in the next thirty minutes.

Special note:  normally Goalkeeper Distribution Ratio is tracked for these reports.  However, I decided to track Zone Exits instead for the first time.  As readers of the blog know, Controlled Zone Entries into the final third are tracked for each game & for this match I decided to also track who was getting the ball out of the defensive third & how they were doing it.  Given that Rangers have been victimized on the counter attack on multiple occasions this season, the need to analyze the team’s defensive plan was glaring.  Look for a post on the Zone Exits in the next day or two.

Lost in the headlines of Kenny Miller’s hat trick was the performance of James Tavernier.  He had a hand in four of the six goals & led the team with 13 controlled entries into the final third.  It is safe to say he has rebounded strongly from his dip in form.

The day before the match I tweeted out that Kenny Miller was due to score given he had the biggest differential in Expected Goals & actual goals on the team.  Well, three goals later & I felt like a damn genius.  Interestingly enough, Andy Halliday was next on the list.  #fancystats

While Barrie McKay’s only contribution to the official score sheet was one shot – when you factor in secondary assists (the pass before the primary assist) you see that he actually directly contributed to a third of the goals.

Another typical outing for Martyn Waghorn who also added a secondary assist to his final line of stats.