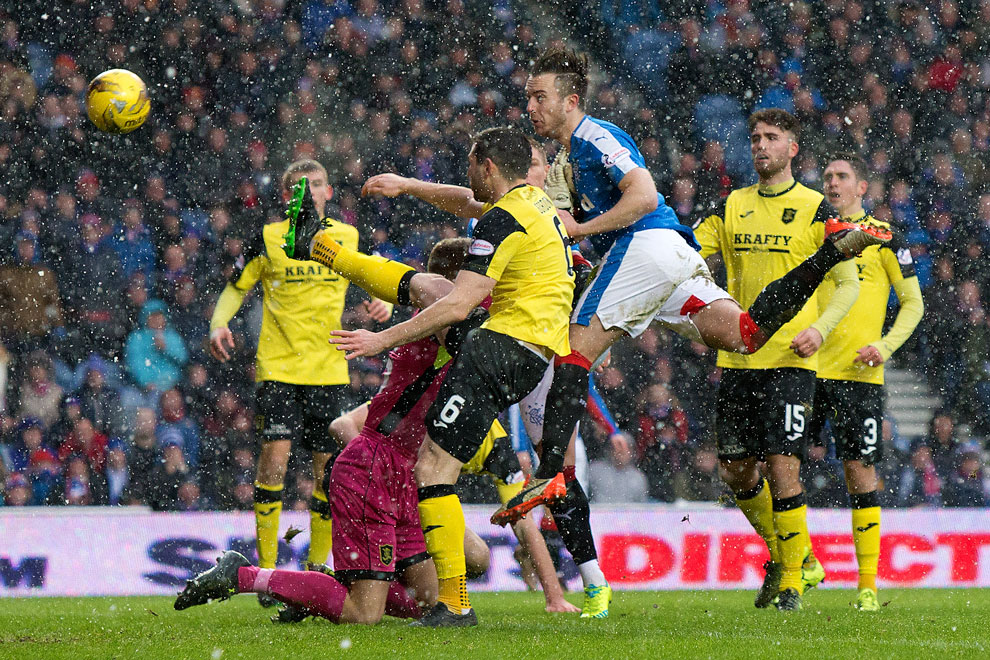 Out for a corner is a new series of posts that shares the statistical results of corners taken by Rangers.

The following data comes from tracking each of Rangers corners.  There will undoubtably be a margin of error when it pertains to measuring how much time Rangers have the ball in the final third after the corner is taken.

When Rangers scored two goals from short corners last week, it felt like a moment of affirmation for those among the supporters who have embraced the team’s ‘new-age’ approach to the set piece.  Of course, there are still the masses that want Rangers to lob in a steady supply of crosses into the box, hoping for the next Mark Hateley to ascend through the mass of humanity to head in a thunderous goal.

Mark Warburton clearly values monopolizing possession as the team averages a league high possession rate of 66% (the next best team is Hibs with a rate of 52%).  Given that ethos, the team has relied on short corners as a means of maintaining control of the ball rather then lobbing a 50/50 cross into the box.  If you consider Rangers struggles at times on the counter attack, this approach makes even more sense.

But is it working?  Are the short corners leading to scoring chances?

Before we see the results, it is imperative to acknowledge that no other team in the Championship generates as many corners as Rangers.  They have earned 177 corners in league play this season & they generate 81% of the corners in their matches.  The next best is Hibs again with 37 less corners & a rate of 61%.  So given this significant advantage, we should shine a pretty bright spotlight on the results to see if Rangers are making the most of this advantage.

I have been able to track 115 corners in the past eleven matches (both league & cup competitions).  The set-pieces were categorized as the following:

First, let’s disprove the misconception that Rangers rely exclusively on short corners while ignoring the opportunity to send a cross into the box.

Of the corners tracked:  52% were short passes, 39% were crosses, & 9% were passed along the ground into (or just outside) the penalty box.

Here is a breakdown of the results:

Short corners led to a shot 35% of the time & the team maintained possession in the final third for an average of 12.7 seconds.

Crosses into the box led to a shot 24% of the time & an average of 7.6 seconds of possession in the final third.  The time the ball flew in the air counted towards that time.

Balls along the ground into the penalty area led to a shot 80% of the time & an average of 10.7 seconds in the final third.  Obviously this was a much smaller sample size but a very effective tactic when deployed.

Below you will see a graphical representation of short corners v crosses in the matches tracked.  The line through the bar marks the number of shots that came as a result of the corner.

The match against Morton was a clear outlier in Rangers approach.  In that game they relied on a cross into the box ten times, compared to just one short corner.  That led to a shot on 50% of the corners.  You wonder if Rangers took advantage of Morton being unable to play Luca Gasparotto?

Besides that game, crosses only led to a multiple shots in two of the games – both against Dumbarton.  Dumbarton has allowed the third most headed shots in the league so this may be case of center backs not being able to clear out chances.

In the match against St. Mirren, once again you see Rangers trying to exploit a struggling backline.  St. Mirren has allowed the most headed shots in the league & that may explain why they sent nine corners into the box & only went short on four of the set-pieces.  However, plans don’t always work as expected as of the four shots off of corners in that match — three came on the four short corners.  They also generated two shots on balls passed along the ground into or around the penalty area.  So they went along the ground six times & in the air with crosses nine times.  The results:  a shot 80% of the time when playing the ball on the pitch & 11% of the time when the ball was crossed in.

That game illustrates the trend that was consistent throughout the games that I tracked.  When Rangers played the ball on the ground they got a shot 41% of the time, while crosses led to shots only 24% of the time.

Furthermore, if you consider that just 10% of Rangers goals have come off headers in league play this season, then Rangers ‘new-age’ approach on corners makes more & more sense.

Sometimes you really should let objective results dictate your actions.

One thought on “Out for a corner: A statistical examination of Rangers approach to corner kicks”