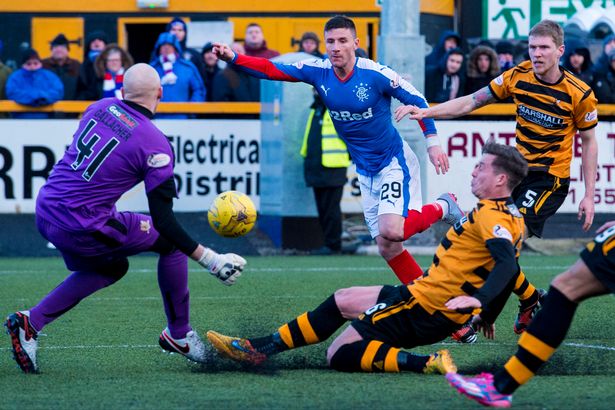 Following on from the Kilmarnock performance, it was another frustrating day against Alloa. Chance after chance was squandered in the first half: Forrester went close, Waghorn snatched at a chance and a header later on in the half went well wide, Jason Holt hit the woodwork and in truth Rangers could have been four or five up at the break. Much of the pre-match talk was about the pitch, but that wasn’t the issue, it was the lack of clinical edge. But the second half started in the same fashion, chance after chance, corner after corner went without reward before Alloa made the most of their rare forays across the halfway line. Jason Marr met the inswinging corner to give the bottom side the lead. Rangers continued to attack after losing the goal equalised in the 83rd minute, James Tavernier‘s low cross was swept home by Michael O’Halloran. Rangers could have won it but Tavernier’s header smacked the crossbar.

The winger, on his first start for the club, was a constant menace to the Alloa rearguard – and he managed to get himself on the scoresheet. It was a very good start for the former St Johnstone man.

Mark Warburton and goalscorer Michael O’Halloran were both left frustrated as they spoke to Rangers TV.

“It’s highly frustrating. The players are in the dressing room angry and irate, but it about the group – it’s not about one player or a group of players, it’s about everyone together, and as a group of staff and players we are really frustrated today as for all the good work we did we didn’t get the end rewards.

“We have to be more clinical in front of goal to get the rewards for all of our good work.

“Some of our interplay was really pleasing. It is a difficult surface –and that’s not an excuse in any way – but it is difficult and you find players taking an extra touch to control the ball, but in football you simply have to put the ball into the back of the net, and we created chance after chance.

“It’s the nature of the game. Sometimes you score five or six having not played so well, other times you play really well and only score one.

“Today, we have only scored one goal but it could have been double figures.”

“It’s disappointing. The lads and the staff all feel it’s two points dropped because you saw the chances that we created so it’s a dejected dressing room.

“It’s pleasing to score, but the most important thing is to get the points and we didn’t do that today.

“I think maybe another ten minutes would have done it. If we’d got the goal a wee bit earlier we might have pushed on and won the game.

“Looking at the chances we’ve created their keeper has had an unbelievable display and it’s just one of those days where it wouldn’t go in the net.”

The draw was the second one-one draw of the season, with the other one being at Livingston in November.

O’Halloran’s finish to make sure that Rangers wouldn’t leave the Indodrill Stadium pointless.

Sorry Rangers. I'm the first to defend my team but that today wasn't good enough. Alloa, that's who were playing…Alloa!!!!!

Agree that some have over reacted to Saturdays result. We dominated that game but didn't take our chances which can happen.

Hibs fail to capitalise on our result. No harm done. But we need to start taking our chances & getting they kind of games wrapped up.

A draw against Alloa is never, ever acceptable. Ever.

Kilmarnock at Rugby Park on Tuesday in the Scottish Cup replay.