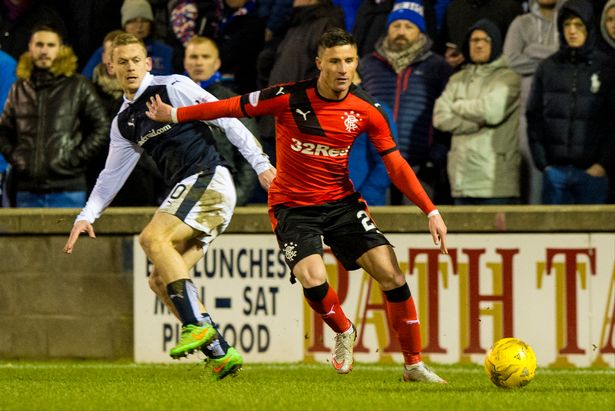 Back in November, while Kenny Miller was mired in a steep goalless drought, the advanced statistics were pointing to an inevitable return of the veteran’s scoring touch.  While looking at his Expected Goals numbers, I wrote – “Even though the goals have dried up of late for the veteran…if Miller keeps getting chances, where he’s getting them – the goals should follow suit.”

As a team, Rangers average 2.68 goals per match, which is nearly a full goal better then the next best team, Hibs (1.71).  Rangers have been thriving off a varied attack that has seen five other players chip in four or more league goals this season.  Jason Holt (8 goals), James Tavernier (7 goals), Lee Wallace (5 goals), Andy Halliday (4 goals), & Barrie McKay (4 goals) have provided a layer of secondary scoring that has been invaluable.  However,  early signs indicated that certain players, especially Holt & Tavernier, would unlikely sustain their high rates of scoring.

Jason Holt was riding a hot hand for much of the season with a shooting percentage that was never going to be sustainable.  His last league goal came on December 28, 2015 against Hibs.  At that point his shooting percentage was 0.615 – meaning 62% of his shots on target beat the keeper for a goal.  Since then his success rate has been regressing towards normality.  In the new year, Holt has seen his shooting percentage dip down to 0.444 – which is still pretty high.

James Tavernier got off to a scintillating & sensational start to the season but given his role & where he shoots from – it wasn’t going to last.  The right back has scored one goal since early November, after scoring six goals in the first 13 matches of the season.  Of his 64 shots this season, 72% of his shots have come from outside the penalty area.  Some of those are free kicks & some are hopeful shots at glory.  Shots from outside the box keep a defence honest & forces them to close down the player on the ball but very rarely to they actually beat the keeper.  Tavernier scored some breathtaking goals at the outset of the season but did anyone really believe that he could keep that form up?  Even the world’s best players struggle to score consistently from long range.

So where does that leave Rangers?  Rangers have hit a bit of a goal drought of late, having only scored five goals in their past six league matches.  Martyn Waghorn is out for the long term & now the statistics are suggesting that Kenny Miller’s form may actually take a dip.

Let’s layout the data for you.  First, a look at Rangers leading goal producers this season.  Rather then simply list a table of goals scored, let’s see which players average the most goals per 90 minutes.  Penalty goals are not factored in.

Expected Goals (xG) can really ground statistical analysis to begin assessing which players/teams are over-performing or underperforming.  When Kenny Miller was struggling to get goals, his xG remained among the best on the team.  He was getting quality scoring chances, the goals just weren’t there…yet.

Expected Goals simply place a probability value of a goal being scored based on where a shot is taken & whether is was kicked or headed.  With more data available, Expected Goals models get more &  more complex. However, given the limited information available from Opta’s coverage of the Scottish Championship – my model is somewhat limited.

The red shaded area in the above visual is where most goals are scored & the closer to the goal the higher the rate of success.

When you take a player’s Expected Goals & compare it to his actual goals – you can begin making some assumptions about his future form.  If a player has scored more goals then expected, he may be due for the goal success rate to take a dip.  If a player is scoring well below his xG, some natural questions come to the surface.  Is this a player who is in a bit of a rut but history suggests he will likely bounce back (see: Kenny Miller) or are there flaws in that player’s ability to finish off his chances?

Below you’ll find the data for Rangers players this season.  It shows the difference between non-penalty goals & Expected Goals.

Is there hope here?  Can Kenny Miller maintain his current pace?  Can Jason Holt start scoring again?  Are one of the January signings the answer?  How about Nicky Clark?

Our last presentation of stats, looks at which players are finishing at a high/low rate & who is getting the best shots on goal.  The graph below looks at shooting percentage (goals /shots on target) & Expected Goals per shot.

The bottom line going forward this season is that Michael O’Halloran may become the player relied upon the most to carry the weight of goal scoring for Rangers.