One of the alluring aspects of using analytics while evaluating football teams & players, is the idea that statistics can be predictive of future results.  Sometimes you can foresee a turn in form for a team or even isolated players based on the statistical output they are creating.  Of course, nothing is ever 100% accurate but objective data can help lead to logical conclusions.

For example, back in November when Kenny Miller was mired in an extended goal drought, the stats suggested he would eventually turn it around.  At the time, Miller was averaging 2.87 shots per 90 minutes & 74% of those shots were coming in dangerous areas.  Yet, he only had two goals in nearly 600 minutes. But his Expected Goals suggested he would increase his scoring rate.  At the time I wrote, “If Miller keeps getting chances, where he’s getting them – the goals should follow suit.”  In the 669 minutes since then he has seven goals.  Interestingly enough, now that he is outscoring his Expected Goals totals, we may see that scoring rate dip as the season comes to an end.

Another recent example, was Harry Forrester.  In his first few matches, he was generating large numbers of shots but the goals weren’t there.  People were beginning to question if had the finishing touch necessary to bury the chances he was getting.  However, his Expected Goals were beginning to pile up & his career shooting rates were suggesting that his actual goalscoring output had to begin matching his projected efforts.

In a short amount of time, Forrester was stockpiling Expected Goals but simply hadn’t found the back of the net.  The logical conclusion was that he was overdue to get his first Rangers goal.  Two league goals & one massive Scottish Cup goal later have silenced any naysayers who doubted Mark Warburton’s signing of Forrester.

So what are Expected Goals?  Here is One Short Corner’s explanation from his introduction to football analytics blog post.  He labeled Expected Goals the “holy grail” of soccer analytics.

But what is it?  Let’s go back to school, simple maths and probability.

Each shot taken by a player has a probability of going in. This probability is expressed in numerical form as a number between 0 (no chance of a goal being scored) and 1 (a goal is certain). The probability of a shot being scored from a location is its expected goals (or XPG/xG if you prefer abbreviations).

Unlike most statistics in the mainstream, (shots, shots on target etc.) expected goals directly measures shot quality, and if taken over the course of the match, both quality and quantity of shots. It makes sense to assume that a side that is able to create more/better chances than the opposition has played better and ‘deserves’ to win, as a general rule of thumb. Sure, statistical anomalies happen, and sides that have an xG of 0.5 over a match can and have beaten sides with 2.7 xG, but (very generally) a higher xG than your opponent means that you ‘should’ win the game.

Expected Goals not only measure a team’s offensive output, but it can also assess how well a defence is playing.  How effectively a team can limit quality shots from dangerous areas can ultimately play a critical role in how a club should be evaluated.  When you couple both Expected Goals for & against you have an authentic indicator of future success.

For example, the only three teams in the Scottish Championship that generate more Expected Goals then they allow are Rangers, Hibs & Falkirk.  Of course, they are also the only three teams with a positive goal differential in actual goals – so let’s see how the rest of the league pans out.

While trying to determine what a team’s upcoming form may look like, it’s best not to look at a team’s Expected Goals in isolation.  Like our example with Harry Forrester earlier, the added value of comparing actual output with projected output is where the ‘magic happens.’

So below you’ll find a graphical representation of each teams’ actual goals for percentage minus their Expected Goals percentage.  For example, Morton has scored 28 goals this season, while allowing 29.  That translates to a 49% goals for percentage.  Their xG% is lower (42%) so there is a 7% difference when you subtract the two.  Basically they have been outperforming expectations & any hopes fans may have had that they would make a push for the play-offs may be put to rest.

Falkirk has been a statistical  anomaly all season long.  Not only have they outperformed their Expected Goals percentage, they have done it at a consistently high rate.  In November, they enjoyed a 15% difference & have sustained that difference all season long.  Most other teams have seen their differences level out & gravitate towards a balance of zero.  Teams like Alloa & Dumbarton have seen their differences lessen, as have Rangers.  Other teams have seen their form sway drastically in either direction.  In November, Hibernian were outperforming their xG & now, given their recent slump,  have underperformed their projected margins.   Conversely, a team like Raith Rovers has seen the opposite happen.

What does this all mean?  Well, if gambling was legal in this country (oh, America & your silly laws) – I’d be looking for Falkirk’s balloon to burst at some point & Hibs being well positioned to pass them by in the play-offs.

To what extent, does Expected Goals percentage pan out to actual results?  If a team is consistently generating more Expected Goals then their opponent is that translating in wins?  The graph below attempts to show the correlation between a team’s xG rates & their actual results. 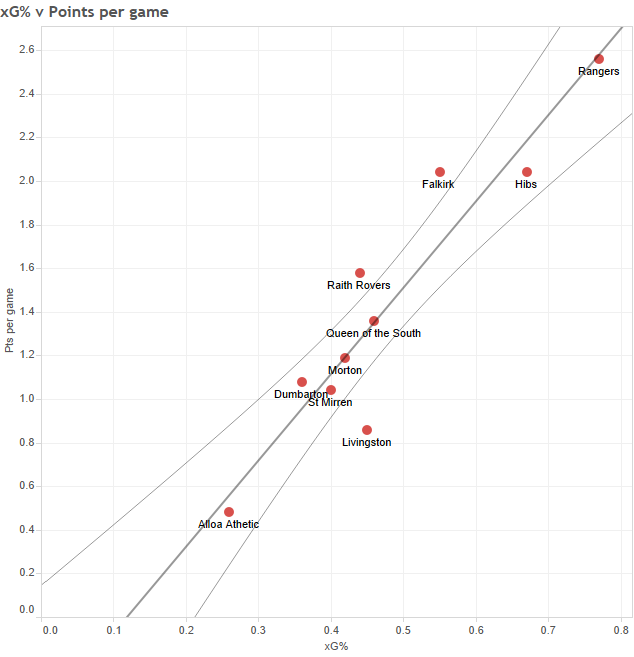 The trend line running through the heart of the graphs shows the correlation between xG% & the average points teams earn from each match.

Even though Falkirk’s difference seems marginal, it’s actually greater than it looks.  They average 2.04 points each match, & the trends suggest they should earn approximately 1.7 points per match given the trends in the league.  If you apply these numbers to the 28 matches Falkirk has played, it would represent a nine point difference.  Can they continue to overcome the inevitable dip in play or are they on a magical run that will carry them to promotion?  Even if that is the case, their management team would be foolish to ignore the probability that they will at some point regress given their statistical output.

Another outlier here is Livingston.  Given the quality of shots they generate in relation to what they allow, they really should not be in a fight to avoid the relegation play-offs.  They currently earn 0.86 points per game, but given their xG%, the trends suggest they should be earning closer to 1.3 points per match.  That would translate to a 12 point difference & would see the team in a play-off spot.  Now you can see why the team sacked their manager, Mark Burchill, around Christmas time.  The results were simply not matching the performances.

So, what can teams do to address this?  One obvious solution is to seek out players who generate high volumes of Expected Goals.  These players are coupling a large number of shots with quality chances.  Obviously, many of these players are not for sale or may not be within the budget of teams like Dumbarton or Morton…but imagine the possibilities if you could dip into League One & find the players who are producing at the same levels of the Martyn Waghorn’s, Jason Cummings’  & John Bairds’ in the Championship.

It should be noted that of the players listed below, Morton’s Declan McManus, on loan from Fleetwood Town, has only played nine matches & is already 17th in league.

Lastly, it should be noted that shots are not isolated incidents.  Recently I have been tracking the build up of each Rangers shot to begin cataloging Expected Assists – basically the pass that sets up the shot on goal. Look for a report on these results in the coming weeks.

One thought on “Expected Goals & the Scottish Championship”