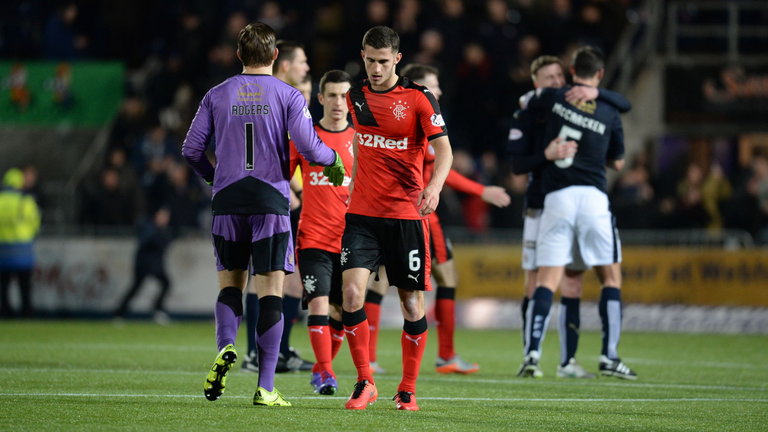 Rangers ‘Hibsed’ this one, no question about it. Kenny Miller and Barrie McKay had given Rangers a two-goal lead within nine minutes – both were in the right place at the right time to tap home with ease following two excellent team moves. Rangers were toying with Falkirk in the first half and it should have been 4-0 at least going into the break. The second half, however, was one that Rangers started well, with Andy Halliday going close. But it would be a combination of Rangers trying to coast the game and Falkirk’s attitude and spirit that meant they would take the three points. Wes Foderingham had to pull off two decent stops before Blair Alston‘s shot had the keeper standing watching the ball nestle in the top corner – he had no chance with it. Myles Hippolyte would level it up after some poor Rangers defending and to crown off a terrible second half, Bob McHugh finished a cross from a few yards out.

The little man had a fine hour. He was outstanding, he took his goal well and was at the heartbeat of everything that was positive about Rangers’ play on the night. If we are being hyper-critical, he should have got his name on the scoresheet more than once.

Mark Warburton and Kenny Miller spoke to Rangers TV in the aftermath of the defeat.

Warburton defended his subs, he said:

“Barrie [McKay] and Kenny [Miller] have worked so hard of late, and we weren’t putting on 16 and 17 year-old boys – we were putting on experienced players. “The bench was a high quality bench, and we wanted to add that energy and maintain a tempo to it, so I have no problem with the substitutions.”

Kenny Miller lamented the missed chances in the first half:

The manager keeps saying that the players will get the rewards that our play deserves and I don’t think that we got that tonight.

“We definitely should have scored more goals and been further ahead and the game should have been put to bed.

“As much as we never played the way that we play and do the right things that we normally do and have worked on all season, we still had a couple of chances I think that could have put the game to bed, but we never.”

It was Rangers’ first defeat in 15 games – the last of which also came against Falkirk at the Falkirk Stadium.

Blair Alston’s goal at 2-0 – that gave Falkirk a way back into the game.

Don't go on after the Dundee team saying we're ready for Celtic then backtrack tonight.

We were poor tonight. We will improve again!

One performance like that doesn't decide the entire season. Too many people judging on one game.

We can't afford to drop our intensity & become sloppy on the ball as it allows the opposition to grow in confidence & gain a foothold.

An absolute Hibsing from Rangers. That's what happens when you switch off thinking the job's done after 45 minutes.

Not too concerned. We played well till we switched off. I suspect we'll learn a lesson from this & it'll come in handy later in the season.

Queen of the South at Ibrox on Saturday.