Regular readers of this blog will know that this season we have shifted the focus of our coverage to the application of advanced stats & as the season has gone on, our presentation of these stats has evolved.

I’ve always been intrigued by passing statistics & what they can objectively show us about players.  However, this data is completely absent in Scottish football (while readily accessible in most other major football leagues).  A DIY approach to tracking passes would be mind-numbing & unsustainable so I decided to narrow the focus of which passes to keep track of.   So, for the past ten matches (starting on February 6th) I have tracked the passes leading to each of Rangers shots.

Additionally, when the key passes are matched up with the Expected Goal values of the shots you have a statistic that has proven to be an extremely valuable indicator of the decisive & creative play of the passer.

Back in 2013, in an article for The Washington Post, Michael Caley detailed the insight that Expected Assists can provide.  “Statistics for measuring creativity in soccer are limited. Perhaps the most often cited one is ‘key passes,’ but it is a rough measure of creative impact.”

“The final pass before a shot is taken is always logged as a key pass. In [an earlier article] I showed how expected goals can be a better measure of the quality of a striker than his raw goals scored or shot totals. The same is true for creative players.”

“Expected assists, using the same methodology, can help us to identify the players who create the best chances for their teammates.”

An article from the Barclays Premier League’s official website adds some more context,  “The measurement of ‘expected assists’ involves looking at what types of chances have been created by a player, with easier chances, no matter whether they were scored or not, rated higher than difficult ones.”

“So a cross to a team-mate in front of goal a few metres out is rated higher than a long ball over the top to a forward who still has a lot to do to score.”

For example, in the ten matches tracked Andy Halliday has the third most key passes on the team with 21.  The Expected Assists on those passes add up to 1.59 – so basically the shots taken from Halliday’s key passes average out to an Expected Goals value of 0.08.  That means the vast majority of shots taken from Halliday’s passes are coming from outside the box, where the shots are less likely to beat the goalie.

Lee Wallace has only 12 key passes in the games tracked but they have combined for an Expected Assists total of 2.56.  So, despite having nine less key passes then Halliday, Wallace has nearly one more Expected Assist.  What does that show us?  Shots from Wallace’s passes average out to an xG total of 0.21 – which means the majority of these passes are leading to shots coming from the heart of the penalty box – this is where the majority of goals are scored.

Here are the Expected Assists totals from the past ten Rangers matches (both cup & league games).  The data reflects the raw totals & are not averaged out.  So players we have not seen much in the past couple of months, like Gedion Zelalem or Martyn Waghorn, will have low totals.

Rangers have had 19.46 Expected Goals in the ten games involved in this study – James Tavernier, Barrie McKay, Kenny Miller, & Lee Wallace have accounted for 59% of those with their key passes.

Considering that Kenny Miller’s primary role is to score goals, the fact that he is third on the team in Expected Assists highlights how critical his deft passing in the final third is to setting up teammates with quality scoring chances.

The fact that Jason Holt is so far down the list highlights the need to couple the Expected Assists statistics with the data on who got the ball to the player with the key pass.  The secondary pass can be the crucial element of the build-up to a shot – just ask Arsene Wenger.

In an interview with the team’s official website, the long-time Arsenal manager explained, “You can’t count only assists but a player like Santi Cazorla gets you out of tight situations and sometimes gives the ball before the assist, which can be even more difficult than the assist itself.”

“So when you know the players, you know their qualities, you just try as manager to find the right balance so the whole teams functions well. Players like Ramsey, Cazorla and Coquelin are important to get the ball into situations where you can be dangerous. If we go back a few years we have the example of Alex Hleb, who used to give ‘pre-assists’ – something that’s now recognised by OPTA as the ball before the assist [aka the secondary assist].”

“He wasn’t too interested in scoring goals but he was capable of getting out of very tight situations under pressure, and if you can do that then it opens up the whole game. If you’re one against two that means somewhere else you outnumber the opposition.” 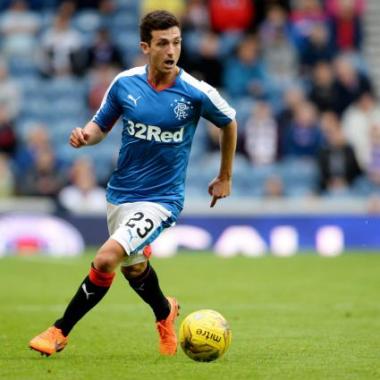 To what extent, is Jason Holt Rangers’ version of Santi Cazorla or Alex Hleb?

Below is the table of passes in the past ten games, including the key passes, the secondary pass & the percentage of shots the player’s passes have led to.

The numbers support the claim that Jason Holt’s role is similar to the aforementioned Arsenal stars.  His passes are opening up his teammates to make the key pass leading to the shot.  Holt & Barrie McKay led the team in secondary passes, & despite only having seven key passes – Holt’s passing has led to 14% of Rangers shots in the past 10 matches.

2 thoughts on “A look at Rangers recent passing statistics”