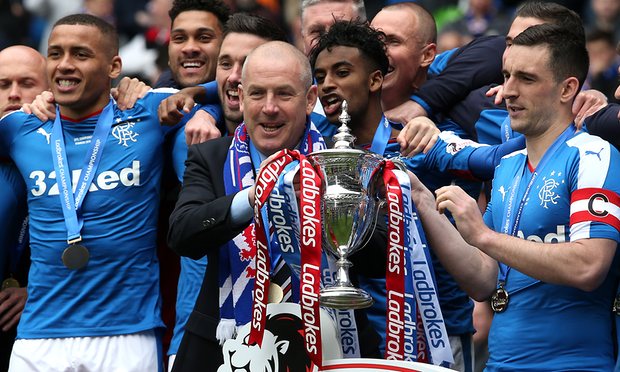 The day was all about getting presented with the Championship trophy, which Lee Wallace would lift to rapturous applause after the full-time – and the players and fans would celebrate in unison as the club is heading back to the top flight.

The game, however, would turn out to be something of a damp squib. And it got even damper when Michael Duffy, on loan from Celtic to Alloa, latched on to Andy Halliday’s short backpass, raced beyond the defensive pairing, before firing smartly beyond Foderingham to give the visitors a shock lead.

Rangers would get back on it and soon after they would be awarded the chance to get level via the penalty spot, but Andy Halliday’s kick went wide. The equaliser would come before half-time, though. Halliday would atone for his penalty miss as he floated a lovely cross into the box and it was one that James Tavernier would head beyond ex-Gers keeper Scott Gallagher.

The second half would continue with many Rangers chances, but they never had enough to find a net for the second time as the match ended in a 1-1 draw.

Mark Warburton spoke to Rangers TV after the match.

The players were angry at half time with themselves. Their standards dropped, and I think perhaps subconsciously, that maybe happened after achieving their goal of winning the league, winning the Petrofac and then winning the Scottish Cup semi-final.

“So I think we have to recognise that, refocus as a group, train well, recover well tomorrow and then start again on Monday.“We have another tough test at Livingston on Tuesday, and when fans go and follow us, we have to make sure we perform.”

The full-back is hitting some good form just at the right time, with the cup final. He was a constant threat to Alloa and was unlucky not to add to his one goal on the day.

The first goal. It gave Alloa a platform to sit deep and play for their point.

Rangers have finished the season unbeaten at home for the second time in four seasons.

Should have been a photographer pic.twitter.com/el1SZdLraX

50,349 fans packed inside Ibrox today – thank you for your wonderful support.