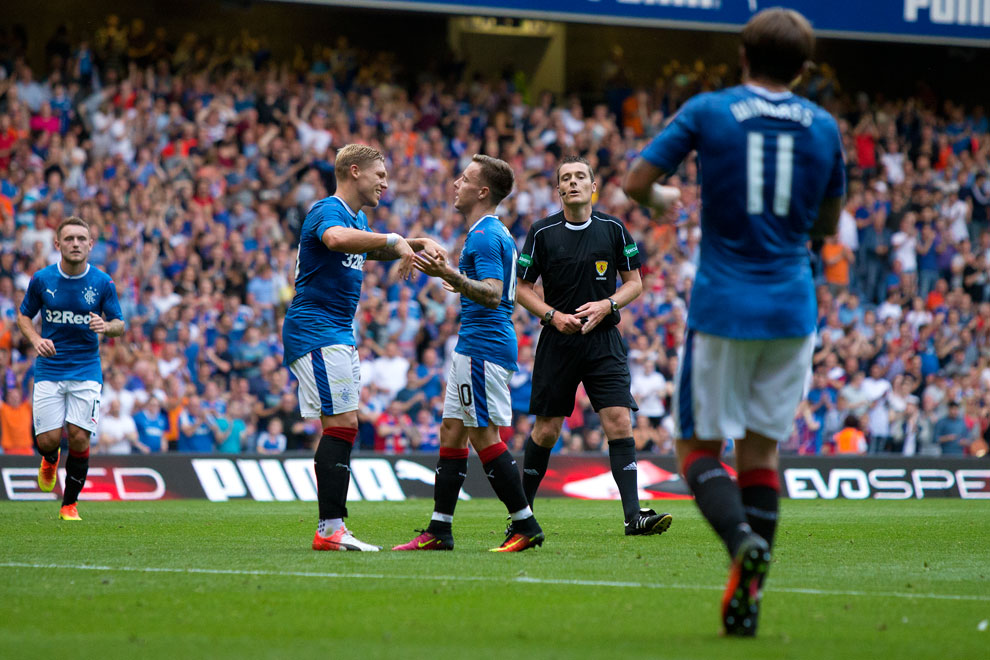 All four of Annan’s shots were long range efforts that posed no threat.

Rangers outshot Annan 10-0 when the score was tied & then 12-3 after Barrie McKay’s goal.

I didn’t make a chart given that Rangers had 91 entries into the final third….Annan?  15.  There were a few missed entries because of instant replays, shots of Joey Barton on the bench, etc., but 91-15 is completely tilting the game in Rangers favor & not really worth the time making a graph to show it.

Link to entries data   Below are some observations of the data.

Rangers had an abnormally high success rate (44%) & shot rate (22%) from non-controlled entries into the final third & this is likely where the talent gulf took over.  Annan was overwhelmed by Rangers pressure & with 10 defenders behind the ball – passes into space proved to be effective.

There was a real balance to Rangers entry points, especially on Controlled Entries.

Each player, besides Barton, had controlled entries on 50%+ of their entries into the final third.

93% of Kranjcar’s CZE led to a positive result & he had a real balanced approach to his entry points.  They led to two shots & six corners.

Eight of McKay’s CZE went up the left side & they led to a positive result 100% of the time.  (His CZE led to the first goal & a total of four shots).

It was difficult to really make any conclusions on Annan’s entries.  They had 15 in 90 minutes & their shots came on rushes up the pitch & were, for the most part, hopeful drives from just inside the final third.

Harry Forrester only played 30 minutes but still had 9 entries into the final third.

While Waghorn & Windass weren’t critical to getting the ball into the final third, or setting up shots with their passing – they were the culmination of the build-up as Waghorn had six shots & Windass had three.  Wallace added four shots.

Martyn Waghorn was the focal point of the attack, while the two fullbacks also proved to be vital to the chances Rangers were creating.

Pass of the match

Josh Windass receives this pass on the left side of the penalty box,  just to the left of this screenshot.  By getting the ball to Windass on this ball, Halliday has bypassed seven defenders in its passing lane.  The shot was missed, but it’s the kind of pass that the team may have to rely on as teams put 9-10 players behind the ball.

There were a lot of great passes in this match but this Josh Windass pass was among the best.  The cross ended up with Lee Hodson getting a header in the six yard box.  Of Windass’ options, Hodson is the most dangerous given his location & the fact that he is basically uncovered.  Windass’ pass will bypass eight defenders (that’s 80% of the players in the box).