Yes, this is a Rangers blog & yes, this post has nothing to do with Rangers.  As some of you know, I’ve been working this season with a lower league club in Scotland.  That work may continue next season, or it may not.  Given that uncertainty, I figured I’d write for pleasure again to fill some time.  I haven’t been able to watch many Rangers matches this season & I can’t tell you why Barrie McKay has joined Harry Forrester in exile. So writing about Rangers will have to be put on hold for now…

I recently read about a group of Columbia University students who were charged with improving Major League Soccer teams who didn’t make the playoffs as part of a sports management class they were taking.  One of the conclusions shared was the correlation between goal differential & points earned.  It’s rather obvious – score more goals than you allow, the more points you will earn.

I decided to apply the process to the Scottish Championship.  I went back & collected the data from each season, beginning in 2007-2008 to 2016-17.  All of that is compiled here.  The next step is to determine what is the correlation between goal differential & points earned (which I broke down to a per game rate).

Here is an interactive graph where you can see where each team falls on the graph.

That should lead to some real trends being established & the data ends up being quite predictive.  I’m no mathematician, but thankfully the program I use to make the graph above can do that math for me.  The R squared value, which basically measures how repeatable data is, is 89%.  It’s not 100% perfect, but it’s close enough to see real correlations.

There will always be variance & a team that has a goal differential of +20 isn’t guaranteed to earn close to 1.8 points per game.  In fact, Dundee in 2011 only earned 1.22 points per game despite having a +20 goal differential.  Over the season, that was a difference of 21 points.  Oh wait, Dundee went into administration that season & were docked 25 points.  So actually the real difference was really just 4 points.

Another outlier was Dunfermline in 2012-13.  They had a GD of +3 but were still relegated after earning 0.94 points per game.  The trends say they should have earned 1.4.  That’s a 16 point difference over the season.  (Checks the internet) hold on!…..they also entered admin & got 15 points deducted.

My point — this data is reliable & even those two outliers prove that.

I went back & identified the point cut-off for making the playoffs & then what was the points earned by the 9th place team each season.  Basically, a point ceiling to shoot for if the promotional playoffs is the objective & a point floor if survival is the goal.

Seasons are marked by the year it ends (for graphing reasons) & also included is the gap between 4th place & 9th place, along with listing the big clubs in the league that season.

The last three seasons have been unique in the sense that there have been multiple ‘big clubs’ in the Championship.  These clubs start the season with a huge advantage & you can see that skewed some of the point ceilings & floors.

It has been much more difficult to get into the promotion playoff picture the past three seasons, while it was significantly easier to slip into the relegation zone those two seasons Rangers were in the league.

The average points per game needed to get into the playoffs from 2015-17 was 1.62 points, while in the seven seasons prior to that the ceiling was 1.44.  What does that mean over the course of an entire season?  Two wins!  The average point ceiling for the playoffs was 58 points with the big clubs in the Championship, while it was 52 with those clubs missing.

Conversely, there has been a similar trend when it comes to avoiding the relegation zone.  But, the trend is that it is harder to avoid the threat of relegation when the big clubs are not in the division.  The average point floor in the past three seasons has been 0.88 points per game , while it was 1.03 from 2007-14.  Over the course of the season that is a five point difference (32  & 37 points).  If a team wanted to avoid the drop over the past three seasons they needed to shoot for at least 33 points in 36 games.  Prior to that, you needed at least 38 points in 36 matches.

Unless Dundee United somehow manages to earn promotion this season, we will be looking at a 2017-18 season with only one ‘big club’ in it.  For the record, I would not group Caley Thistle or Motherwell in that group of ‘big clubs’.

The gap between the promotion & relegation playoffs isn’t going to be as vast as it has been the past three seasons. That will make each league match even more important to each & every team.  That awareness will make this summer the most critical for Championship teams since 2014.

The good news is that we have some tangible points to target, whether the goal be promotion or it be survival.

If promotion is the goal, a team is going to need to average 1.49 points per game, so the target is 54 points.  If a team can manage to win half of their matches, that would translate to 54 points.  Obviously draws are factored in as well, but if a team is truly looking for promotion – they need to start looking at draws as two points lost, rather than one point gained.

If survival is the goal, a team will need to average 0.98 points per match, which translates to making 35 points the point floor.  Now, when it comes to relegation, 9th place means you’re in the playoffs to survive in the Championship.  To avoid that, the past ten seasons worth of data suggest you need to average 1.00 points per match to ensure 8th place.  That’s 36 points a season.  That would be the bare minimum & if you glance at this year’s table you see that 39 points will actually be what it takes (& even that may not be enough).

Let’s bring all of this full circle.  Looking at the trends over the past 10 seasons, a team would need to aim for a goal differential of about +10 to reach that point target of 54.  If survival is the goal, the goal would be to limit goal differential to no more than -18.

What does a +10 goal differential look like?  The following looks at how clubs who have met that threshold made it happen.  Note:  I have excluded Rangers, Hibs, & Hearts from this graph.  These were Premiership level clubs who are now back where they belong.  Given that next year’s championship will ‘be back to normal’, let’s look at how Championship level clubs have made this happen in the past.

It should be noted that each & every one of the clubs listed below finished in the top four, furthering the validity that the +10 goal differential would ensure a playoff spot.

Conversely, four clubs (18%) averaged 2.0 goals scored or more per match & only 23% managed a +10 goal differential while averaging less than 1.5 goals per game.

The bottom line, a team will need to average three goals for every two matches they play, while not allowing more than 5-6 goals in a five match window.

As teams analyze their team’s needs going into the summer, they need to look at their squad & see what fixes are the most doable now & address what’s not a current reality.

For example, Dunfermline will likely finish 5th in the league & one spot out of the playoffs.  They average 1.29 points per match & have a goal differential of +2.  Even with a win on Saturday, they’ll finish six points short of the point target of 54.

They average 1.29 goals per game & allow 1.23.  If 1.5 goals for & 1.14 goals against is what it usually takes to get to a +10 goal differential –  Dunfermline’s management team need to realize that defensively, they’re close & a focused analysis of their defence may be all they need to make the systematic changes necessary.  Clearly, what Dunfermline needs is goals.  The difference between 1.23 & 1.5 goals for per game is eight goals in a season.  As they go into the summer, Dunfermline’s top priority needs to be figuring out how they are going to add those eight goals to their squad. 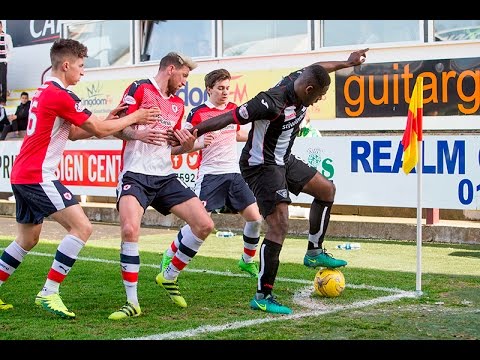 Now let’s say survival is the goal.  The magic number is making sure your goal differential is no worse than -18.  That not so sexy number should get you to the point floor of 36 points & give you that hope of staying up.  Usually a -18 goal differential isn’t an objective that any club should shoot for, but rather it should be used as a benchmark that is a warning sign to clubs.  If your results start suggesting you will end up with worse then an -18 goal differential & survival is your goal – teams cannot hesitate to make immediate adjustments to avoid an inevitable fate.

Below are the 19 clubs who have had a goal differential worse the -18 over the past 10 seasons.  Five of these teams actually placed higher than 9th, but 74% ended up in the bottom two of the league.  Sometimes luck is involved in a team’s final standings, but no smart team would want to tempt their fate & finishing with a -19 goal differential or worse.  Note:  we may add Raith Rovers to this list depending on how Saturday goes (they currently have an -18 goal differential).

Those are some ugly numbers.  Notice only Dumbarton, in 2015-16 averaged more then 1.5 goals per game.  The rest of the teams really struggled to score regularly.  Forty percent of these 19 teams failed to even average 1.0 goals per 90.   Obviously a lack of goal scoring kills teams.  But remember, the point floor for survival is 1.0 points per match.  That’s a win & a draw in a four match window.  It’s not pretty, but if these teams could figure out how to be more defensively stout, that goal differential would begin to get a little more bearable.

Each of the teams on this list allowed more then 1.5 goals per 90 & 75% of them allowed 1.75 per game. That’s nearly nine goals every five games played.  Good teams average 1.14 goals allowed per 90 in the Championship (which is about six goals in 5 games).  In this example, teams need to shave 1-3 goals allowed from their totals every month to better ensure chances of survival.

As management teams assess their clubs & if they determine that their main priority is survival – they need to do everything they can in the summer to improve their defensive talent & systems that they play.  It won’t be attractive football, & they still will need goals…but it is their best bet at staying up.  Maybe they should spend their time working on their set pieces as well if their open play emphasis will be on defence.

Written under the influence of the new Jesus & Mary Chain album, Swutscher, & Hawkwind.