A couple of days ago I published my findings after applying age adjusted goal stats to forwards in the Scottish Development League.  The post had a detailed breakdown of the Vollman Age Adjusted Goal Projection & also had a whole slew of witty gifs.  You probably won’t find all that this time.

One, because you can read all about that here & to be honest, I want to share the findings on midfielders & wingers in a brief, succinct way.

That’s largely because goal scoring isn’t exactly the first stat that I would look for when evaluating midfield prospects.  For forwards….it made sense.  Identifying which young attacking players are finding the back of the net at a rate that suggests that they are prime candidates to be productive first team goal scorers.

But, given that the only data available for this level of football is goals – let’s see what results we get.  If anything, this should be an entry point to identifying players that are showing elite production playing against their peers in the U20 age group. 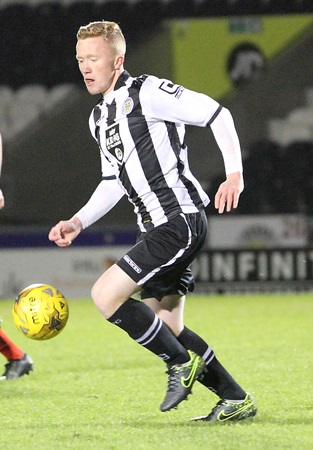 Below you’ll find the top 25 midfielders & wingers from the Scottish Development League based on their Vollman Age Adjusted Goal Projection.  You’ll also see their non-penalty goals & minutes played (as explained in the previous post – this is only from the data I could find, which was inconsistent from team to team), along with their goals per 90, where they ranked in that stat, their prorated goals that have been adjusted to age-based regression, their age at the beginning of the 2016/17 season (in years & months), their Vollman Age Adjusted Goal Projection & then their rank for that stat. 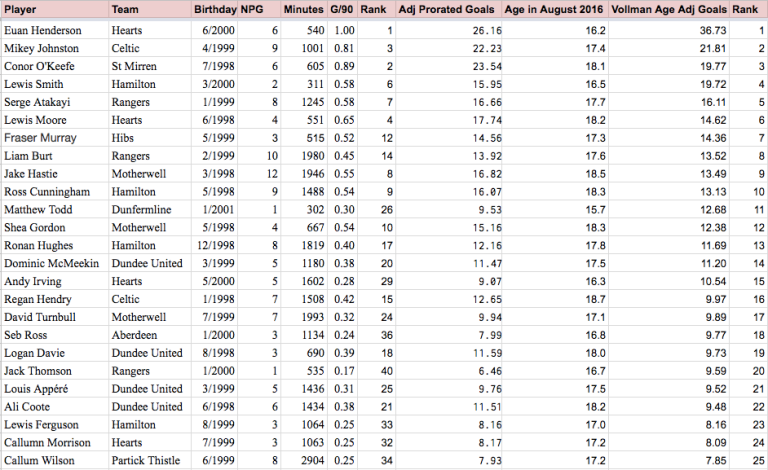 Again, these stats are only meant to be an entry point.  Teams looking to invest in a young midfielder could use this as one way to try to identify prospects who could turn into offensive threats from the midfield.  If more data was available, this kind of age adjusted goal production would be a nice comparable when looking at passing stats & defensive stats.

As I mentioned in the first post, there are dozens of blog posts that could be written based on this data collected & I invite you to do so.

All I ask is, if you do use these stats in any way….please give credit where credit is due.