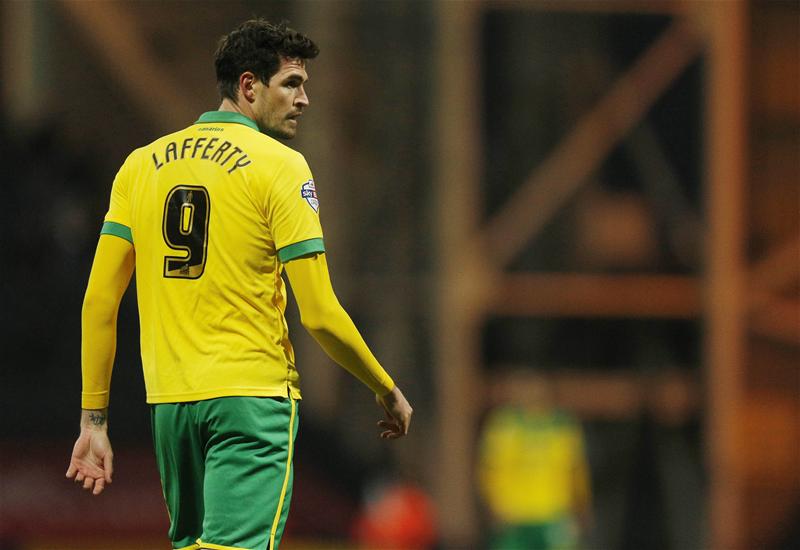 Recent reports have Hearts linked to former Rangers striker Kyle Lafferty.  Lafferty scored 31 league goals in four seasons in Glasgow & averaged 0.46 goals per 90 minutes.  He flipped that production into a move to Switzerland….then Italy….then back to England….then back to Switzerland…then back to spending most of his time on a bench in England.

He also turns 30 in September.

These are not your normal indicators of a player you may want to invest in & in full disclosure, I was expecting to trot out some stats showing why Hearts would be smart to avoid Lafferty.  Then the numbers began to tell a slightly different story.

Below you will find Kyle Lafferty’s Goals Above Replacement numbers since the beginning of 2008.  I explained this stat in a previous post, but as a refresher GAR measures how much better a goal scorer is in relation to a lower end forward in that particular league.  Basically, they are a player easily replaced by the next guy in line (either on that team’s squad or from a lower league).  It’s a baseline of measuring a player’s output.

For a reference, his 2008-2012 stats reflect Lafferty’s GAR in the Scottish Premier League with Rangers & then his 2014-17 seasons are from the English Championship when he played for Norwich & Birmingham.  Also note I combined his 2015-16 season with his 2016-17 numbers given those two seasons only totaled 436 minutes of league play.

Now what do these numbers mean.

Below you will find the number of forwards in the Scottish Premiership who have attained different Goals Above Replacement results.  These are from 2013-17, but it can provide some context of how Lafferty’s production compares.  Lafferty’s place is annotated on the chart. 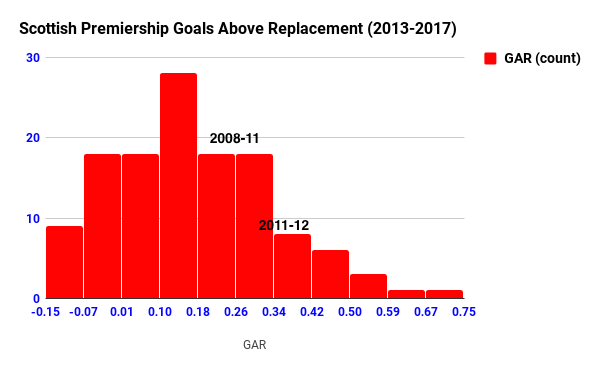 Lafferty’s Goals Above Replacement while with Rangers ranged from 0.206 to 0.347.  From 2008-11, Lafferty was a slightly above average goal scorer in the SPL.  His last season with Rangers, you can see he became an a very good goal scorer.  He averaged 0.53 goals per 90 that season as a 24 year old.  He was entering his peak years as a footballer & his goal output began to show that.  You can see on the chart, that the vast majority of forward in the Premiership do not score at the rate that Lafferty did in his final season with Rangers.

His success in Italy earned him a three year contract with Norwich.  That’s where his career bottomed out.

Below you have the breakdown of how many forwards attained different Goals Above Replacement results in the English Championship over the past four seasons.  Lafferty’s place is labeled to give you a sense of where his GAR numbers placed. 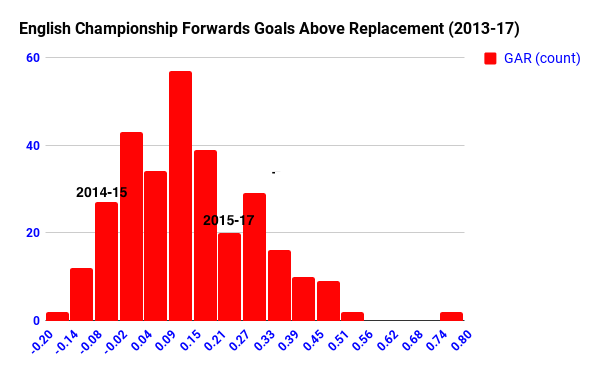 Lafferty was an absolute bust in his first season with Norwich.  His Goals Above Replacement was a -0.06, which means he was worse then a replacement forward.  80% of the players who saw minutes as a forward could walk in & score at a better rate then Lafferty did.

That explains why he was loaned out twice over the next year.  First, to Rizespor in Switzerland, where he averaged 0.32 goals per 90 & then to Birmingham in the English Championship.  He averaged 0.28 goals per 90 there.

But when you combine his output from his cameo for Birmingham with the goal he scored in 112 minutes as a sub last season for Norwich, it combines for a goals per 90 of 0.41.

His Goals Above Replacement, albeit in a very small sample size of minutes, from 2015-17 is 0.24.  That slots him in as a slightly above-average goalscorer in the English Championship.  That’s not too shabby.  That should earn you a second chance.

If you’re a Scottish Premiership team, taking a gamble on a 30-year old, above-average goal scorer from a superior league isn’t a bad move.  Given that he has a proven track record of being an above average scorer in Scotland means he would come with the confidence that he can be successful here.

Yes, he’s 30 & that’s not usually an indicator of success in the Scottish Premiership.  Of the forwards whose Goals Above Replacement was 0.34 or higher over the past four seasons, the average age was 26.4.  Only eleven of the 66 forwards (17%) on that list were 30 or above.

It’s a risk whenever you sign a player entering his 30s…but Lafferty is probably a calculated risk worth taking.