One of the goals of this site is to provide an objective view of what is happening on the football pitch.  Sometimes that matches up with the eyeball test & sometimes it doesn’t.  Statistics are factual, even though the extent to which they represent the truth is often open to discussion.

Who are the best manager in recent years in Scotland?  No Rangers fan is going to say Neil Lennon or Alan Stubbs & no Celtic supporter is going to say Ally McCoist (wait…umm – nobody says that).

Once we get past that initial supporter bias, then we will list off who the media has touted as being a good manager…or who we think we’re supposed to think is a good manager.

More importantly, how do clubs filter out who they think a good managerial candidate is?  Obviously, there is an old boy network that feeds some (if not, all) of the decision making & I think that most people would say that is the wrong way to go.

If I was an Old Firm club looking for a list of coaches to interview with experience in the Scottish game – the short list of candidates to interview would be:  Robbie Neilson, Alan Stubbs, Alex Neil & Derek McInnes.  Obviously, Celtic wouldn’t interview McInnes, nor would Rangers interview Stubbs – but these are managers who have all won in Scotland & have a track record of improving the clubs they take over.

If I was running Hearts, Aberdeen or even Hibs – teams with aspirations to finish in the top three on a regular basis – I’d consider a Gary Holt or Ray McKinnon.  That’s about it….Neil Lennon was a coupe for Hibs, Hearts took the right approach with a calculated gamble on Ian Cathro & Aberdeen were fortunate that McInnes decided to stay because the pool  of experienced managers in Scotland who would be appropriate for that level of club is pretty shallow.

If you’re another Premiership club looking for a new manager, you really have to hone in on what it is you want in a coach.  If you remove the aforementioned names from the list & only look at certain characteristics that’s how you would find the candidates.  Basically, the number of managers who have proven that they can be successful with the multiple facets of leading a club is pretty minimal.

If all you care about is the bottom line:  results based on consistent goal differential then you’d look to coaches like Peter Houston or to a lesser extent Jackie McNamara (based on his stint with Partick).  Maybe even a Stuart McCall – but the fact that his Motherwell teams did not have a positive goal differential is a red flag. Or, you’d use the results as an opportunity to give John Brown another shot (his results were actually pretty decent).

Maybe you’re a team that needs improvement & needs a manager who has a track record of making his teams better.  Let’s say it’s December & you’re on the wrong end of the table – then maybe you turn to a Jim McIntyre (who turned around both Queen of the South & Dunfermline), a Jim Duffy, or give Terry Butcher another chance.

Let’s say you’re a club that wants to truly implement a five-year plan that is rooted in player development.  You want to rely on bringing younger players into the first team & building your team that way.  Then you’re adding names like Lee Clark, Billy Reid, Jim Jeffries & Jackie McNamara to your short list.

There are some names you didn’t expect to see on some of those lists.

These were not simply pulled out of my ass.

The names listed above were managers who had been among the best in Scotland at achieving those tasks (earning results, improving a team, & player development).  I didn’t include managers from the big five clubs (Rangers, Celtic, Hearts, Hibs, & Aberdeen) because if you’re Partick Thistle or Dundee that’s not the pool of coaches you can afford to recruit from.

My original goal was to develop a system that used statistical results to rank the best managers in Scotland since 2011….and that’s what you’ll ultimately find in this post.  However, as the process developed I quickly learned that there aren’t many who could “check off all of the boxes” if you’re a team with aspirations of long term success.

If you’re going to hire a Jim McIntyre, you need to know that his track record of developing young players isn’t all that great (yet).  If you’re going to hire a Danny Lennon you need to realize that you’re probably not going to win very many matches, but he will give youth a chance.  Actually Robbie Neilson is the only manager who truly has won at a high rate while highly investing in young players.  It’s a complicated formula…

I decided to get the facts on the following categories:  points per game, average goal differential per 90 minutes, improvement in both of those categories, player development, & a manager’s success on the transfer market.

The first couple of categories were straight forward math.  Measuring a manager’s improvement meant comparing his results to the results of the previous boss (in both points per game & goal differential averages).

When it comes to player development, I worked out a system that favored giving players under the age of 22 a chance, while also honoring the smart play of relying on players in their peak years (23-28), & dinging coaches that relied too heavily on players 29 or older (no longer in their prime).   I also factored in that coaches often inherit a roster & don’t always have complete control over who he keeps or gets rid of based on contract situations.  To address that, I used the debutant data from Transfermarkt.com to tabulate which kinds of players the manager gave opportunities to.  Basically, did a manager rely on bringing in younger players into the first team for the first time at that level of competition or vice versa.

Finally, I did include the managers ability to make a profit via transfers into the rating system.  Again the data is from Transfermarkt & guess what – almost none of the managers was making a killing off of transfers.  Let’s just say Scotland hasn’t necessarily become a destination for clubs seeking to sign talent.

When ranking all of these results, I gave the most weight to the bottom line:  results & goal differential.  After that improvement in those areas & player development were given the next highest value.  Finally, making a profit in the transfer market was given the lowest value.

The rankings are not perfect & I’m the first to admit it.  Yes, Brendan Rodgers is ranked far too low, but that’s because the ranking system dinged him for being in the red with transfers (which Celtic can afford to do) & his player development (he inherited a pretty strong squad).  Also, I wish I had devised a way to not reward improvement so much if a manager took over in a lower division after relegation.  But then again, not every coach benefited from that scenario.

Even though it’s not a perfect list, it should be a good conversation starter given that it’s based in actual data.

Some notes:  a manager had to be in charge for a minimum of 20 games to be included.  Only matches in the Premiership & Championship were factored in.

Each manager received a rating (1-5) for each category.  I decided to get creative with those ratings as well.

I recommend clicking on each of the following graphics to more easily read the wonderful prose. 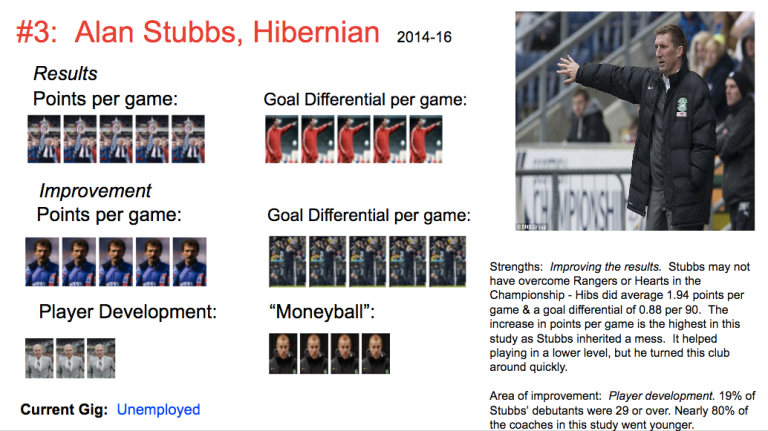 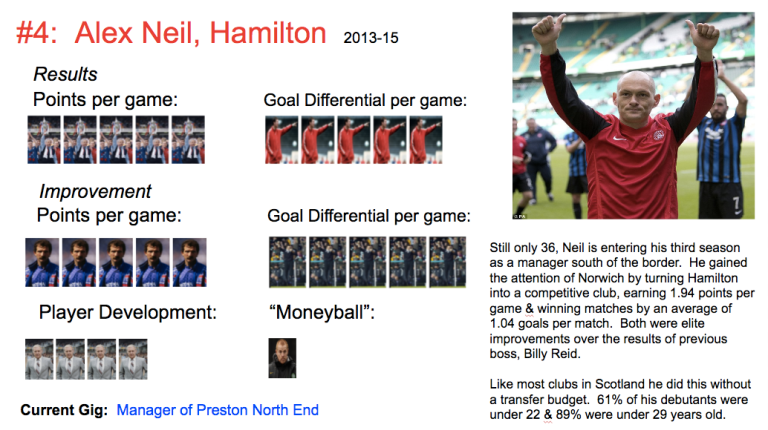 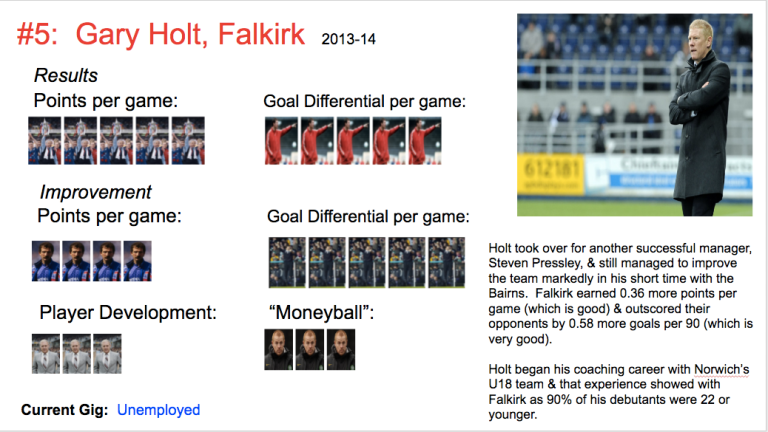 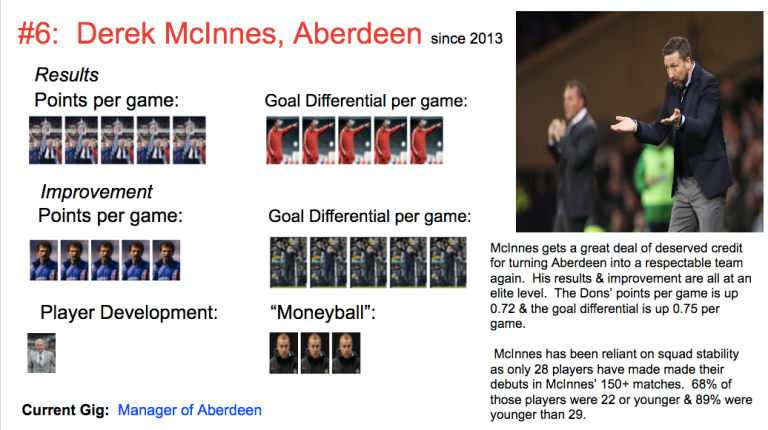 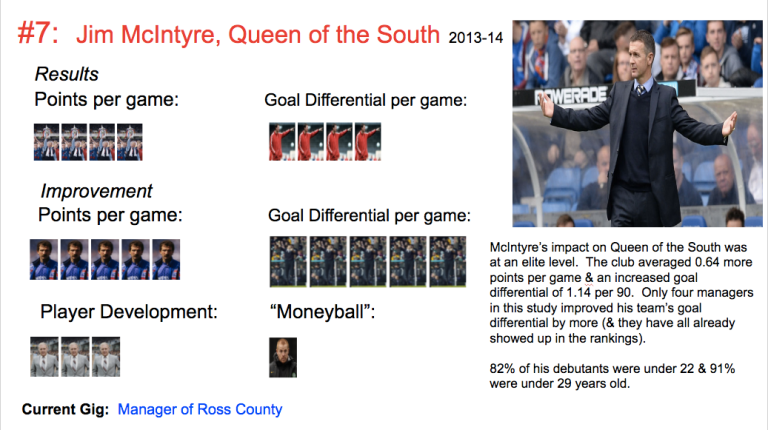 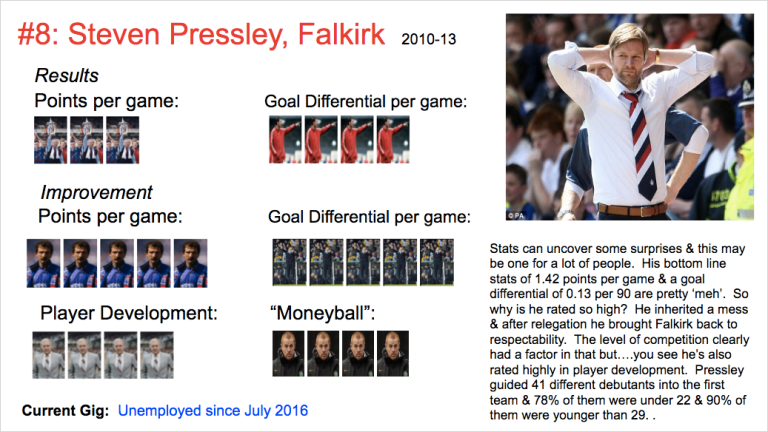 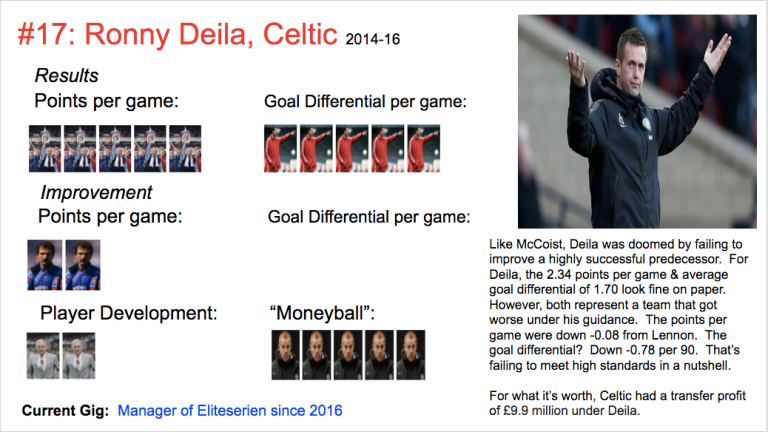 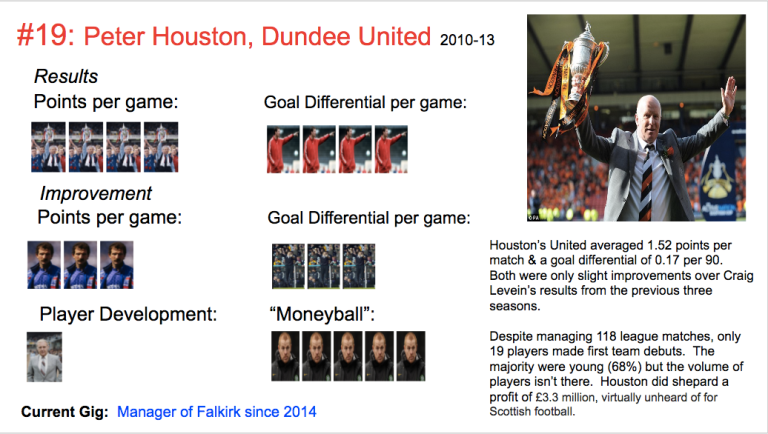 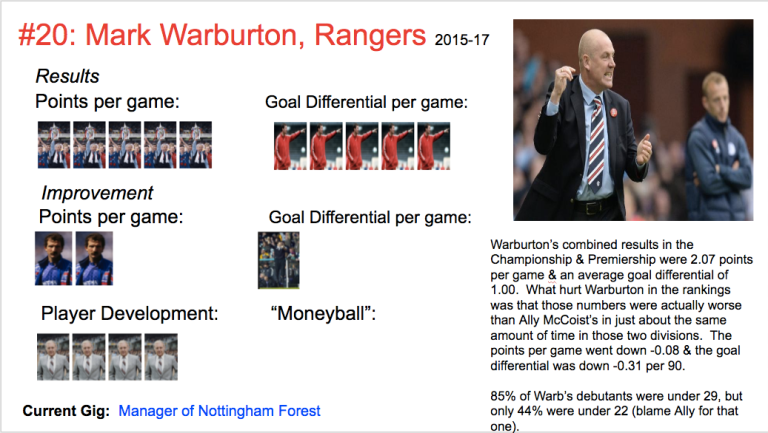 There’s your top 20 from the past six seasons in Scottish football.  The following managers are still ranked in order, just minus the fancy graphic.

A couple of notes on two managers who didn’t make the top 20.

Neil Lennon’s low rating with Hibs is partly due to inheriting a club that was already on the verge of promotion.  Hibs did average 1.97 points per game & a goal differential of 0.94 per 90.  However, those rates were only slightly better than Stubbs’ (+0.03 & +0.06).Lennon gave eight players their Hibs debut & his approach was on the short term.  Of those eight, three were 29 or older & only two were 22 or younger.

Ally McCoist, sigh…the man was my hero growing up.  As a manager, it was always going to be a challenge replacing Walter Smith & that shows in his improvement ratings.  Rangers averaged -0.18 less points per 90 under McCoist (his results from Division Three & League One aren’t included).

Ally was able to turn a mean profit but much of that was under duress.  Player development was a real weakness here: 31 players made debuts & 45% were 29 or older.  Only 29% were 22 years old or younger.

Here’s the rest of the list with strengths & areas of improvement listed (when appropriate).

The complete list with all of the data can be found here.