As many of you know, I have launched a project to collect an extensive database of statistics for each player in the Scottish Premiership.  All of the date is collected here.  I think it is safe to say that you will not find this kind of detailed stats anywhere else for the SPFL…or too many other leagues.

In this post, I’ll highlight a handful of stats & present them with a focus on the output of each Rangers player & then give you a sense of how their top players stack up in relation to the rest of the league.

The first set of data will be a statistical rating that is unique to the site called Offensive Statistical Contribution Rating (OSCR).  This is an attempt to create a single number that rates a player’s offensive impact on his team’s chances of winning matches.  Normally this stat should be isolated to single matches but as the season goes on a per 90 minute average will be a nice barometer of a player’s value to his team.

For a more detailed breakdown of how this rating is determined take a gander over here. 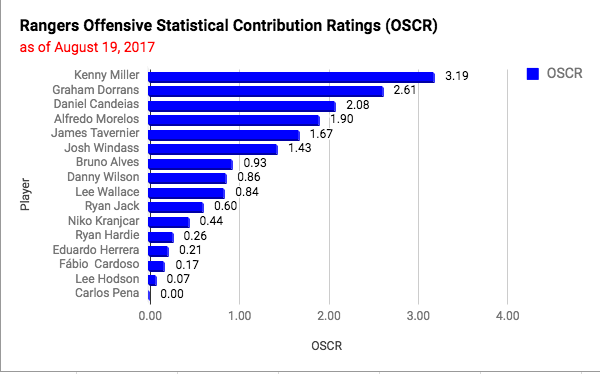 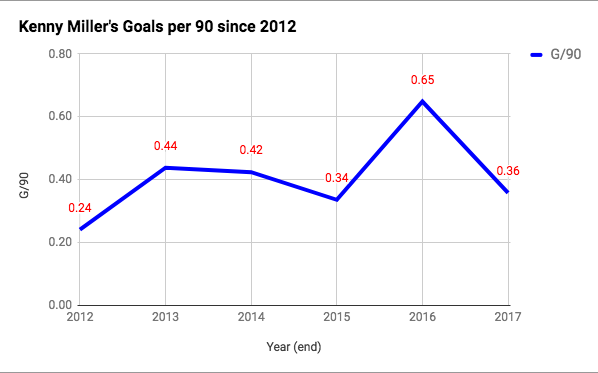 That’s enough on Miller….& maybe some of the other stats will spell out why certain players have higher or lower OSCR ratings.  If not, there’s always next week

Now for some context….here is the top 20 for OSCR for the entire Premiership. 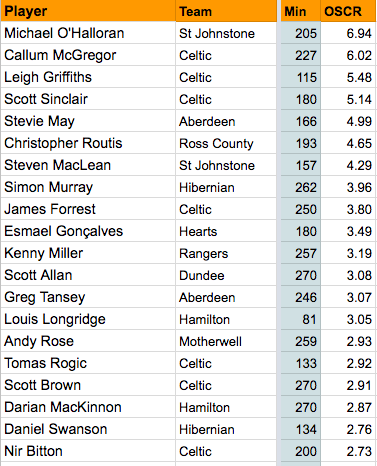 For further context, here is the top 20 players in Expected Assists from the Premiership.

The last stat I want to highlight this week is Scoring Chances.  I define these kinds of shots as:

Kicked shots that come from the red shaded area.  Headers are only included if they come from vicinity of the six yard box

As a team, Rangers rank 6th in Scoring Chances with 11, ahead of Hamilton, Kilmarnock, Ross County (seven each), Hibs (6), Partick Thistle & Hearts (three each).  Celtic have 18 Scoring Chances, while Aberdeen have 17.

As the season goes on, the rate of shots that are Scoring Chances (ScCh Rate) will be an interesting tool to begin measuring the effectiveness of different strikers in the league.  If Kenny Miller can keep seeing 80% of his shots being Scoring Chances…the goals will come.

Here is the leaderboard for the Premiership: 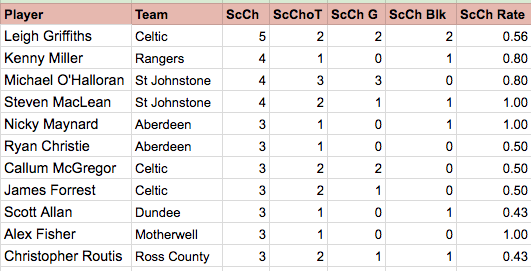 Notice that Kenny Miller isn’t the only one struggling to put away their Scoring Chances.  Nicky Maynard, Ryan Christie, Scott Allan, & Alex Fisher have all been shut out & like Miller – if they keep getting those chances…well, you know what I’m going to say.

I invited you to play around with all of the data that I’ve made available.  These stats will be made available for FREE until September 7th.  After that a one-time fee of £15 will be required to get access to the data.  If circumstances change at any point & if I am unable to finish compiling the stats for the entire season than the money will be reimbursed.

One thought on “Updated player stats for Rangers, a.k.a.: The case to keep Kenny Miller in lineup”