Only five league matches have been played so far in the Scottish Premiership, which is what we call in the business “a super silly small sample size”; however I am a big believer that teams should be measuring trends in play over five match segments.  Chunking out the season into these segments can highlight if the results are matching the performances & whether play is improving, staying steady, or getting worse.

My goal is to publish the data highlighted in this post after every five matches to see what the trends are telling us for clubs in the Premiership.

The first will be aligning Expected Goal Differences with actual goal differences.  How are teams performing in relation to what the Expected Goals suggest they should be.

Of course, it should be again noted that in only five games – whom you’re playing has a real impact on some of these numbers.  The only top five team that Rangers have played was Motherwell (a match in which Rangers were very much outplayed).  What will happen to their stats after they have played Celtic, Aberdeen & St. Johnstone?

So…you know take all of this with a grain of salt.  It’s still only September.

Let’s look at how Expected Goal Differentials are correlating to the actual results on the pitch.  This time we’ll compare each team’s Expected Goals Ratios with their points earned per match.  xG Ratio is the rate of total Expected Goals in the matches played that are xG for the team. For example, there have been 15.45 xG in Rangers matches & Rangers offense accounts for 10.00 of those & the defense has allowed 5.45 xG.  That equates to a ratio of 65%  [10.00/15.45].  By the way, 65% is very good.

My hypothesis that a stat like Scoring Chance Ratio may be a much better barometer to use when assessing whether teams are earning results that are aligned to their play on the pitch.

I define Scoring Chances as being:

Kicked shots that come from the red shaded area.  Headers are only included if they come from vicinity of the six yard box

Below you’ll find the Scoring Chance Ratio for each team (same concept as xG Ratio) & their points per match. 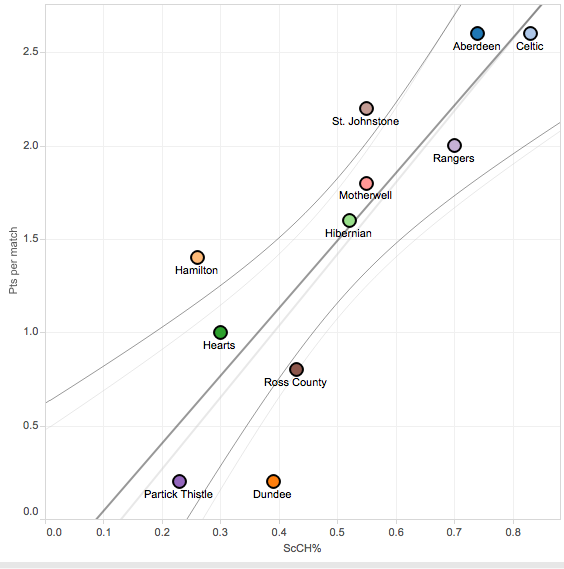