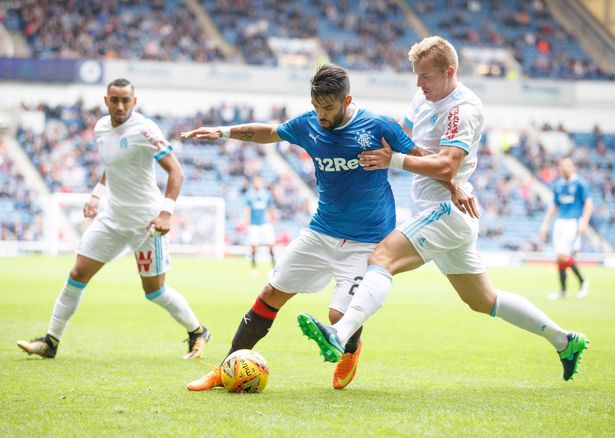 The stats used in this post come from a database of nearly 100 statistics that I’m collecting this season for the SPFL.   Access to updated stats will only be made available to people who contribute a one-time fee of £15.  If you are interested, read more here.

We’ve all seen the statistic.  Such & such player complete 18 of 22 passes in his last match.  Without context, this doesn’t tell you much as a standalone stat.

One of my goals this season is to provide context to passing statistics by tying passing to the chances that are ultimately created because of a passing network that led to shooting opportunities.

The goal of this particular post is to share some of the stats that I’ve been collecting to see which players’ passing is having the biggest impact on teams’ attacks (& for fun…taking a stab at identifying players who aren’t really impacting his team’s offensive results at all).

Let’s begin with that passing network leading to shots.  Each week, I track the three passes that directly lead to every shot.  Those are labeled:

Key Passes:  the pass that sets up a shot (basically, a shot assist)

Secondary Shot Assists:  the pass to the player who gets the key pass to set up a shot

Establishing Passes:  the third shot assist.  The pass to the player who gets the Secondary Shot Assist

Each statistical category will be presented in per 90 averages.  Players need to have played at least 200 minutes to be considered 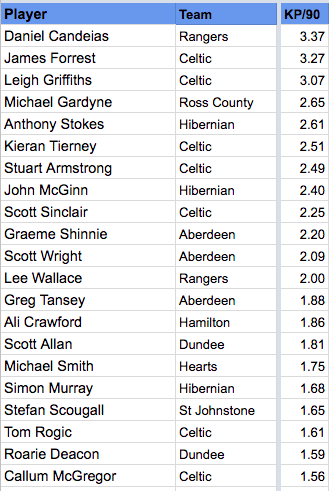 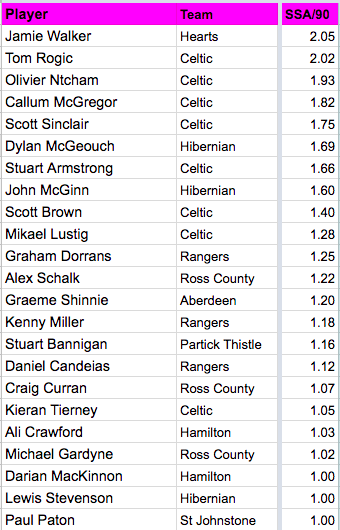 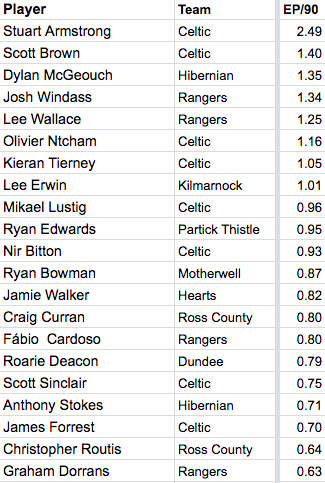 Expected Assists (measures the quality of chances that a player creates based on the xG of the shots that they set-up.  Read more here) 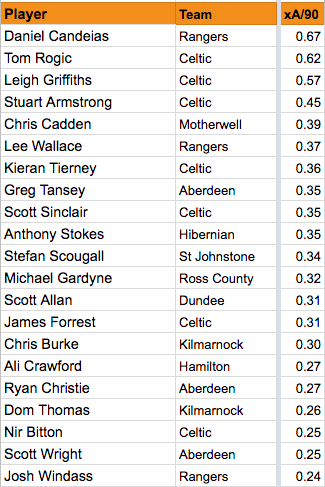 xG Chain (Credits each player who had a Key Pass, Secondary Shot Assist, or Establishing Pass as part of the build up to a shot.  The value is based on the xG of the shot created.  Read more here.  This only includes the passes leading up to the shot.  The shooter does not receive credit as part of the xG Chain, given the goal is to credit players for their build up play.) 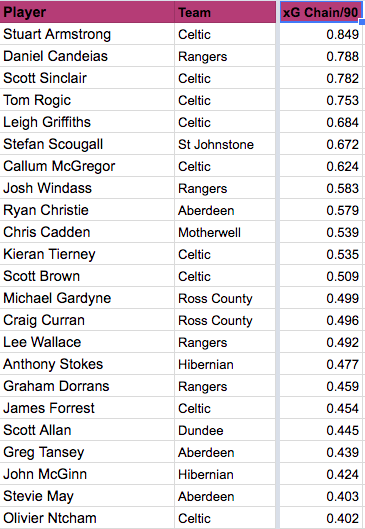 Includes lowest xG Chain of midfielders & forwards who have played at least 200 minutes. 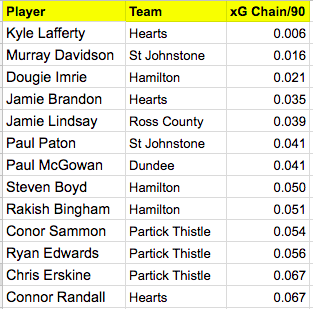 This is only one stat, but should serve as an entry point to further analysis for clubs.  Some players are asked to play more defensive roles (like Ryan Jack who has the lowest rate for a Rangers player), but then again others are expected to be much more active in the build-up play for teams.

Someone like Dougie Imrie is a 34-year old winger who is doing almost nothing in creating plays that lead to shots, or someone like Murray Davidson is expected to drive offensive possession from a central midfield role & it just isn’t happening (of course, he’s also potentially playing through concussion symptoms).

Then there’s a Kyle Lafferty who has the fourth lowest OSCR rating of any forward who has played at least 100 minutes this season.  He’s been among the worst strikers in the league & part of that is the fact that he isn’t connecting play from a forward position (on the opposite end of effectiveness has been Leigh Griffiths, Anthony Stokes, Stevie May, & Alfredo Morelos – the top four forwards in xG Chain per 90).

The bottom line is that only five matches have been played, & this analysis is meant to highlight trends rather than final conclusions.  It’s also an example of if teams aren’t doing this kind of statistical analysis then they may be missing performances that are either helping or hindering their team’s offensive output.