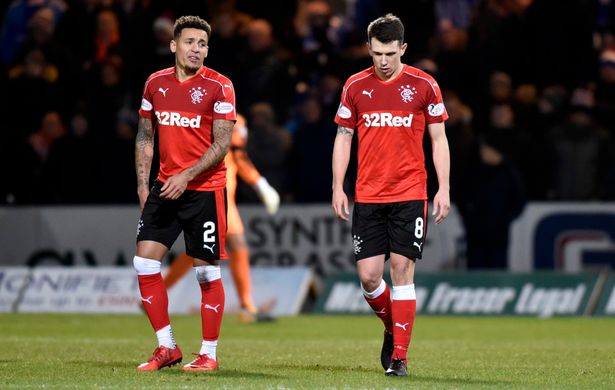 Let me tell you a little story about a NHL head coach, once known as a relic from a different time & who was best known for his showdowns with local reporters.  He has consistently questioned the publicly embraced advanced stats in the hockey universe, which made him a whipping boy in many circles of hockey fans.

However, John Tortorella has always been a champion for one stat in particular that looks at Scoring Chances for & against.  The head coach for the Columbus Blue Jackets told the team’s official website, “Sometimes, people get down on me because they might think I’m a little old school; but I think analytics are very important to the game.”  Torts regularly posts the Scoring Chance data up in the locker room for the players to see.

“You need to get a little bit deeper (than one measure). You need to spend a little more time finding the right analytic and nothing defines or tells the story of the game more than scoring chances for and scoring chances against.” (For the record, Rangers had six Scoring Chances against Dundee, including Josh Windass’ goal.  Dundee had two & both were goals).

While many mocked Tortorella for not embracing the advanced stats that were in vogue, his team did something unexpected.  They got good, really good and are among the league’s best yet again this season.

So now, when he talks about stats….people are actually beginning to pay a little more attention.

This week he spoke up again,  this time to The Athletic (which is a subscription site, hence the screenshot): 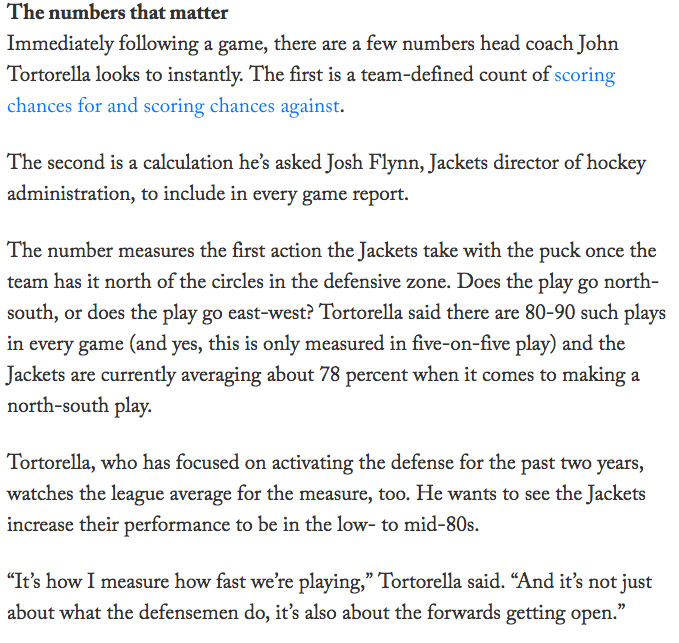 Getting the puck north-south, could just as easily be translated to – moving the ball up the pitch, rather then side-to-side.  Given the apparent struggles of Rangers to play with tempo & to create transition plays through the midfield into the attacking third, I decided to apply Tortorella’s emphasis of north-south play to a Rangers match.

I tracked Friday’s loss to Dundee & kept track of the ‘first pass’ of a possession & whether it went, north (forwards), south (backwards), or east/west (side to side).  Basically, whenever Dundee gave the ball back to Rangers I counted that as a new possession & looked to see where the initial pass went.

It was my first time I’ve done this & there are changes I would make next time but here are the results.

That doesn’t really tell us much.  I also tracked where the first pass was made & whether Rangers were able to get the ball into the attacking third on that possession.

Rangers earned possession in the defensive third 23 times & the first pass went forward 74% of the time, backwards 13% & east/west 13%.  Additionally, there were eight other times the ball was simply cleared up the pitch.

Here is the individual breakdown of each player & the first pass they made if earning possession in the defensive third. 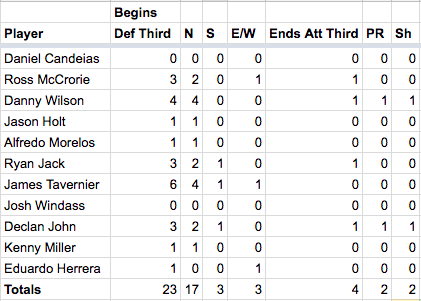 Of the four defenders, there are no real outliers of how they moved the ball.  Each of them consistently looked to play the ball forward.  No surprise to see Ryan Jack heavily involved, which will be a trend seen all over the pitch.

Rangers turned possession into a successful transition into the attacking third on 58% of the possessions that began in midfield.  When they did, it translated into a shot 22% of the time.

This rate seems low, & the next step would be to study these plays to see how, why & when the possession broke down. 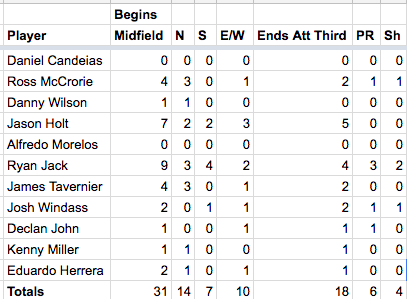 The only players who consistently moved the ball north on the first pass of a possession in midfield were Ross McCrorie & James Tavernier – two defenders.  The four midfielders combined to get the first pass 58% of the time in midfield & it went forward 28% of the time when they started a possession.  Ryan Jack & Jason Holt looked to play the ball backwards or east/west just as much as they did to get it forward.  The two wide midfielders, Windass & Candeias, only got on the ball to start a possession from midfield on two occasions.  It should be noted that one of those possessions led to a shot.

The split between possessions that began on Jason Holt’s foot with Ryan Jack is interesting given that the team was able to transition into the final third 71% of the time that Holt started the play & only 44% of the time when Jack initiated possession.

Regardless, Rangers were not very good in the final third & only saw a positive result from transition beginning in the midfield 33% of the time & only generated a shot 22% of the times they got into the final third (the same rate of when starting possession from the defensive third).

Rangers only began a possession (after Dundee gave it up) in the attacking third seven times, which represents 11% of the possessions. The team’s instincts were to get the ball & attack when they did, as five of those seven first passes went forward.  Rangers created a shot on 29% of these possessions.

Ryan Jack led the way with two first passes in the final third (both led to shots), while Candeias, Morelos, Tavernier, Windass, & Declan John all had one.

That last number made me realize the main change I would make the next time I do this.  Rangers are often guilty of retaining possession that ultimately leads to nothing & struggle to generate tempo while in transition.

Given that, I plan on only counting whether the team can get the ball into the attacking third within a set amount of time after earning possession (I’m thinking 7-10 seconds…but am open to suggestions).

Two other changes I’d make include:

2 thoughts on “Making the first pass: Trends from Rangers loss to Dundee”